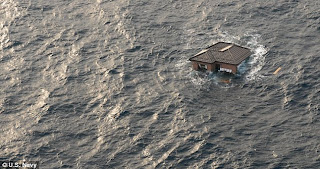 Cars, whole houses and even severed feet in shoes: The vast field of debris from Japan earthquake and tsunami that's floating towards U.S. West Coast 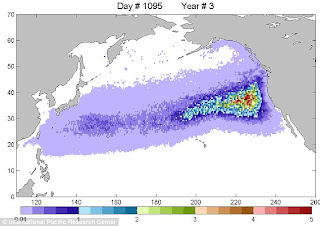 A vast field of debris, swept out to sea following the Japan earthquake and tsunami, is floating towards the U.S. West Coast, it has emerged.

More than 200,000 buildings were washed out by the enormous waves that followed the 9.0 quake on March 11. There have been reports of cars, tractor-trailers, capsized ships and even whole houses bobbing around in open water.

But even more grisly are the predictions of U.S. oceanographer Curtis Ebbesmeyer, who is expecting human feet, still in their shoes, to wash up on the West Coast within three years. 'I'm expecting parts of houses, whole boats and feet in sneakers to wash up,' Mr Ebbesmeyer, a Seattle oceanographer who has spent decades tracking flotsam, told MailOnline.

Several thousand bodies were washed out to sea following the disaster and while most of the limbs will come apart and break down in the water, feet encased in shoes will float, Mr Ebbesmeyer said. 'I'm expecting the unexpected,' he added. 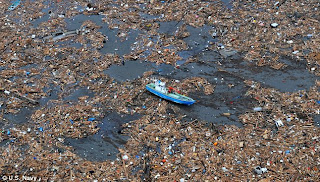 Back in college, a test in an undergraduate oceanography class was to trace a hypothetical item as it drifted from Point A to Point B on the globe, listing the name of the currents that moved it.