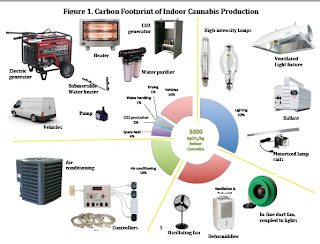 
The study,Energy Up In Smoke The Carbon Footprint Of Indoor Cannabis Production written by Dr. Evan Mills says it's not the Maui Wowie itself that causes the giant carbon footprint, is all of the electric accessories used to grow the stuff.

A little story here.  Once upon a time, when we lived in Oregon, and visited the land my dad and his buddies owned, there was a very pleasant guy with a cute girlfriend who lived down the canyon.  He built two huge greenhouses where he "grew hydroponic tomatoes." One late evening I was hunting the mountain over the greenhouses. The lights were on, the air conditioners were blowing fresh air in.  I thought to myself: "He's not making his money growing tomatoes, is he?"

The next week we heard that another hunter in another part of the county had looked over the bales of hay blocking the greenhouses he had there, and seen the dope being grown, and called the sheriffs.  I never really kept track of the case, so I don't really know what happened, but the property changed hands shortly after that.  As far as I know, the greenhouses could still be there.
Posted by Fritz at 10:43 PM

Email ThisBlogThis!Share to TwitterShare to FacebookShare to Pinterest
Labels: energy, Me