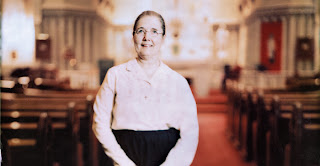 A nun fights to recover her good name


It was not until Sister Mary Schmuck left her home state of Kentucky for the Sisters of Mercy convent in Brooklyn, N.Y., a borough that operates under the influence of Yiddish, that she was confronted full force with the knowledge that a person with her family name faces certain regrettable challenges. “People would do double takes on the phone,” she said. “They were deciding whether to laugh or say something or not.” Many New Yorkers were forthright in asking whether she was playing them for fools. “I went to the terminal at LaGuardia one day, and there was a nice-looking ticket agent named Carlos-something—not a Jewish person—and he took my ID and said, ‘You’ve got to be kidding.’” She said she told Carlos, “Young man, schmuck is German for ‘jewel.’ It is fine that you grew up in a Jewish neighborhood. I live in one, too, near Williamsburg. Please give me my boarding pass.”

Sister Mary acknowledges, obviously, that schmuck, in Yiddish, a language derived from German and Hebrew, refers to what she calls “the dirty male part.” And she recognizes that schmuck serves as a broad-spectrum insult as well, corresponding, more or less, to “idiot” or worse. Not as much, however, in Kentucky. It was idyllic, growing up a Schmuck in Kentucky, Sister Mary said. “It is my understanding that Grandfather Schmuck came from a Lutheran family, but there had been some sort of move to or from the Catholic Church.” She does not know if the Schmucks among her German ancestors were jewelers, though it’s possible, and she’s proud that the cathedral in Cologne is home to the Schmuck Madonna, which many believers have adorned with jewels in gratitude for answered prayers.

I think she should just change her name to Kike1.


How schmuck came to be a rude word for part of the male genitalia is not as obvious as one might think. Both Sister Mary and I thought the nether-region connotation of schmuck derived from the notion that the male genitals represent “the family jewels,” but according to the lexicographer Michael Wex, a top-tier Yiddishist and the author of How to Be a Mentsh (And Not a Shmuck), the Yiddish and German schmucks are completely unrelated.

“Basically, the Yiddish word comes out of baby talk,” Wex said. “A little boy’s penis is a shtekl, a ‘little stick.’ Shtekl became shmeckle, in a kind of baby-rhyming thing, and shmeckle became shmuck. Shmeckle is prepubescent and not a dirty word, but shmuck, the non-diminutive, became obscene.”

Well, I wish her luck in her crusade, but if I were a betting man, I wouldn't put anything on her side.

1The word kike was born on Ellis Island when a Jewish immigrant (Stephen Haas) who were there were also illiterate (or could not use Latin alphabet letters), when asked to sign the entry-forms with the customary 'X,'* refused, because they associated an X with the cross of Christianity, and instead made a circle. The Yiddish word for 'circle' is kikel (pronounced KY-kul), and for 'little circle,' kikeleh (pronounced ky-kul-uh). Before long the immigration inspectors were calling anyone who signed with an 'O' instead of an 'X' a kikel or kikeleh or kikee or, finally and succinctly, kike.
Posted by Fritz at 8:00 PM