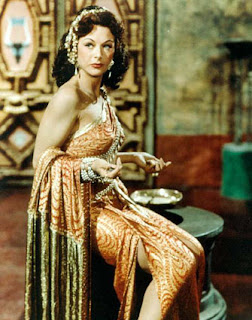 While snooping around for my old Rule 5 post regarding Natalie Portman's scientific career, I ran into some information on Hedy Lamarr that I had never heard before; that she was widely regarded as one of the inventors of "Spread Spectrum" techniques for broadcasting control of missiles over a number of frequencies to make them more difficult to read or jam.  Basically, the system as patented in 1942, switched among 88 frequencies using a "piano roll" (a piano has 88 notes).  Frequency switching technologies have be downsized and automated, and are now crucial in our communication network.  In 1997, she and composer George Anthiel were awarded the Electronic Frontier Foundation (EFF) Pioneer Award.  The same year she was also awarded a Bulbie(TM) Gnass Spirit of Achievement Bronze Bulb, award for lifetime achievement for inventors.  I suppose this would make her more engineer than scientists, but on behalf of scientists everywhere, I'll claim her as one of ours.

She, and her first husband (she had six marriages, apparently she was fan of switching marital frequencies often), Friedrich Mandl, a fascist Vienna-based arms manufacturer learned of the problem in defense meetings.  Why a Jewish actress and her fascist husband were attending defense meetings in the early 40's I can't fathom, but the world was smaller then, I think.  She left this husband over his fascist associations, drugging him, taking the jewels, hiding in a brothel and fleeing Germany for Paris where she divorced him.  Good move.

Of course, Hedy is best known for her work as an actress.  She was a native of Vienna, Austria, and named Eva Maria Kiesler.  In 1930, at the age of 17, she played a bit part in her first movie, an German flick "Geld Auf Der Strase" (Money on the Streets).  In 1932 she played in the German "art" movie "Extase" (Ecstasy), where she posed nude:


I remember all too well the premiere of Ecstasy when I watched my bare bottom bounce across the screen and my mother and father sat there in shock. - Hedy Lamarr

Shots from this film is helpfully located here and here:

Shockingly, a beautiful young woman willing to take her clothes off for the camera came to the attention of Hollywood directors and producers, and her acting career was off to the races. She was signed by MGM studios, and her first American film was "Algiers", where she starred opposite Charles Boyer in 1938.  She was often cast as a seductress, and likely her most famous role as the biblical villainess is Delilah in Cecil B. DeMiles Samson and Delilah".  She starred in upwards of 35 films up until 1957 (I was 6)...

She apparently spent the money she made on films freely.  In 1965 she was arrested for shoplifting, but the charges were drooped.  She was also arrested in1991 in Florida for shoplifting a little more than $20 worth of crap.  In her autobiography "Ecstasy and Me" she noted:


On a recent evening, sitting home alone suffering and brooding about my treatment at the police station because of an incident in a department store, and being replaced by Zsa Zsa Gabor in a motion picture (imagine how that pleased the ego!) I figured out that I had made – and spent – some thirty million dollars. Yet earlier that day I had been unable to pay for a sandwich at Schwab's drug-store. 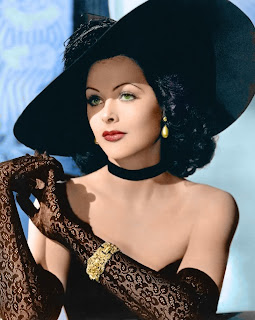 Mel Brooks appropriated her adopted name for a character in the Blazing Saddles, "Hedley Lamarr", the evil businessman played by Harvey Korman. In one scene, Brooks's character calls him "Hedy", and Korman corrects him saying "It's Hedley" to which Brooks replies "What are you worried about? This is 1874... you'll be able to sue her!"

Hedy Lamarr died in 2000, and at her request her ashes were scattered in a forest in her native Austria by her son, Anthony Loder.  She left behind quite a number of amusing and pungent quotes. I'm sure Hollywood publicists contributed to this list...

They don't make stars like that anymore.  RIP Hedy.


Thanks to the Rule 5 Wombat  from The Other McCain's Rule 5 compilation and The Classical Liberal for the links!
Posted by Fritz at 11:23 AM