A severe storm touching off a near record number of tornadoes tore through the South yesterday and up through the mid-Atlantic today.  At this point over 150 tornadoes were spawned by the storm, and the death toll is up to 292, most of them in Alabama.  We were under a tornado watch and even a warning at one point this morning, but all we got out of it was a short, violent thunderstorm, with lots of lightening, rain and wind. However, today is also the anniversary of the tornado that ripped through La Plata, Maryland, and across Charles and Calvert County leaving massive destruction on April 28, 2002. 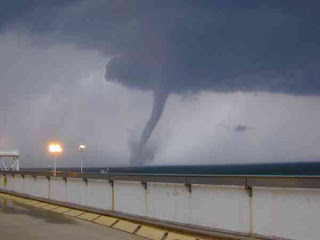 Georgia and I missed the warnings for that, and huddled at home as the remnants of the tornado passed a half mile from our house and crossed out over the Bay on its way to the eastern shore.  Someone at CCNPP took these pictures, and they were published (and passed around) locally: 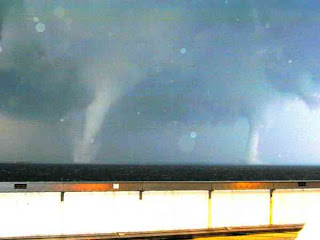 Note that the second picture, on the left appears to show two funnel clouds.  From where the tornado passed on the shore, we can estimate that those pictures were take from a distance of about 3 miles.


Our hearts go out to all those affected by these storms.
Posted by Fritz at 8:59 PM

Email ThisBlogThis!Share to TwitterShare to FacebookShare to Pinterest
Labels: Chesapeake Bay, Me, weather