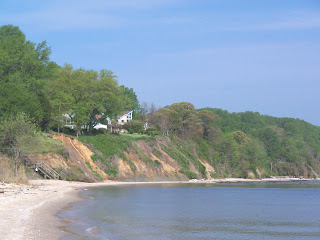 After yesterday's mist, today was bright and blue.  This is one of the nicest times in Slower Maryland, and it's great to be out on the beach.  It was nearly deserted, probably because of people going to church.  Joel and Red were there, however. 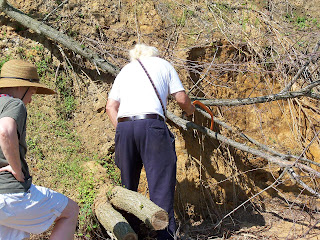 Yesterday we decided it would be a good idea to bring a saw, and clear some of the fallen trees and limbs out of the way.  Georgia and I forgot the saw, so Georgia went back for it.  On the left, Joel saws away at a piece of Black Locust.  Take a good look; it's rare to see Joel breaking a sweat. 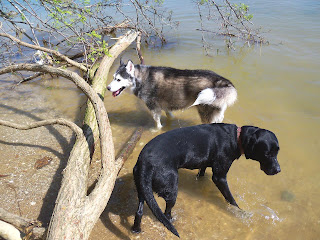 "People, always fussing with something.  Why don't they just crawl under the logs on their bellies, like we do?" 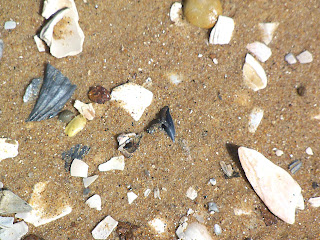 Because we carved a trail through the brush up the beach, we got further up, and found a few more teeth than usual.  Here's a respectable Hemipristis serra tooth where I found it. 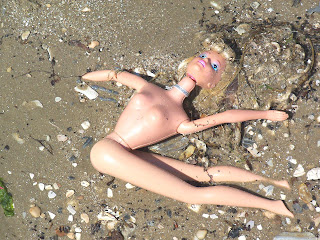 I think it's a little late for this damsel in distress. 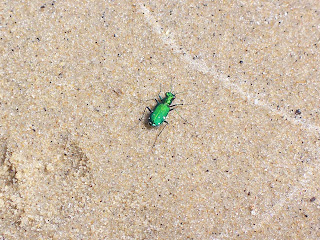 This Six-Spotted Green Tiger Beetle hung around long enough for me to get a decent picture. 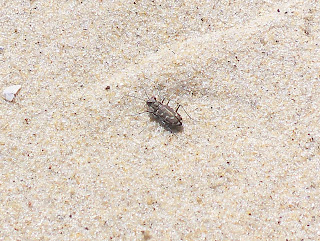 Though much drabber, this beetle is considered much rarer.  It is the Puritan Tiger Beetle, considered an endangered species, and the cause of much furor in our region.


In the Chesapeake Bay
The Chesapeake Bay contains only two metapopulations along its shorelines, one on the western shore and one on the eastern shore. In Maryland the Puritan tiger beetle has very specific habitat requirements. The larvae occupy only naturally eroding cliffs, where they live in deep burrows after digging in sandy deposits on non vegetated portions of the bluff face or at the base of the cliffs. They are most abundant at sites where the bluffs are long and high with little or no vegetation and composed in part of yellow or red sandy soil. Erosion results in the loss of some larval beetles, but is necessary to maintain the bare bluff faces they require.

Life Cycle
Along the Chesapeake Bay, adult Puritan tiger beetles are first seen in June and July when they emerge to feed and mate along the beach area. After mating the females move up onto the cliffs to deposit their eggs. Newly hatched larvae construct burrows in the cliffs and pass through 3 larval stages before metamorphosing in the adult form. It takes two year for the Puritan tiger beetle to complete its life cycle.

Hmm, I'm not so sure about that "first seen in June and July".  I saw pretty decent number of them today, and I have this  photo to prove that at least some of them emerge in April. 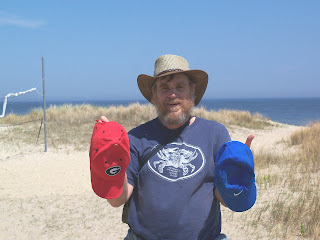 Anyway, the reason the Puritan Tiger Beetle has caused so much angst in our area is that they are being used to stop further development along the cliffs.  If you own a cliff area where tiger beetle can nest, you can do very little to prevent that cliff from eroding, even if it threatens your house.  A lot of people with houses near the cliffs would rather have their houses than Puritan Tiger Beetles...

This was also the opening day of "Hat Season" for me.  A lot of fishermen trolling on the bay lose their hats to a gust of wind, and when trolling, it's waaaay too much trouble to haul in the lines and go back to get it.  The hats wash up on the beach, sometimes nearly pristine, and other times far worse for wear.  Today I got a Georgia Bulldogs hat (red) and a Nike hat (blue).  Both were in nearly pristine condition.  If you see this and want you hat back, send me an email.
Posted by Fritz at 3:37 PM