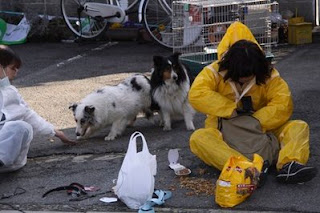 
TOKYO – When Etsumi Ogino saw a news photo of a pack of shelties wandering through an abandoned town near Japan's tsunami-damaged nuclear plant, she thought of her own 13-year-old canine Kein and jumped into action.

"My heart trembled," said Ogino, a 56-year-old volunteer at an animal shelter in Chiba prefecture. "They looked just like my dog. I started searching for them right away." 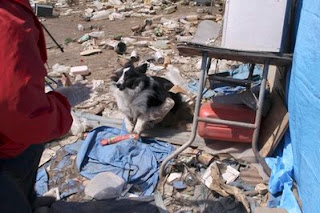 Shelties huh? Well, not quite as good as Siberians I suppose, but nice dogs none the less.


In the wee hours of Sunday morning, seven volunteers left Tokyo and drove over broken roads and past demolished houses to meet three other volunteers in the ghost town that Minami Soma has become. Some had prepared radiation suits and others wore simple vinyl raincoats.

The first two to arrive found the pack around the Odaka train station, near the owner's home, where the AP team had last seen them..."The dogs had been left some dry food, and weren't starving.

It took a while to entice them with snacks, and six or seven were bundled into each car. The group saved 20 dogs in all.

Another feel good story from the earthquake tsunami zone.  While I'm sure there are many touching stories about humans saving humans, it's good to see that man's best friend, and closest ally down through the ages are not being abandoned.

I doubt that the radiation was any serious threat to the dogs, but likely the dogs are not accustomed to having to shift for themselves, and while I imagine they probably find something to eat, it might not be something especially desirable...
Posted by Fritz at 9:43 AM