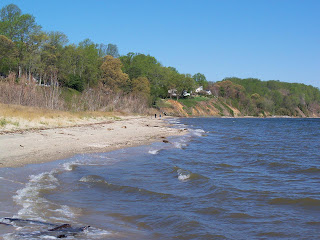 The mid-Atlantic region had a terrible storm yesterday and last night.  40 deaths were attributed to this storm over 6 states, mostly in the south.   Skye was unhappy and panted for hours during the worst of the lightening, but other than some downed tree branches, we fared just fine.  And as is often the case here, the day after a storm is gorgeous. 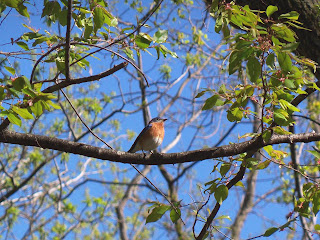 The storm stripped away several feet of beach, and that combined with a very high low tide, caused by the storm surge, we had to walk around the narrow cliffs area, and into the neighborhood, where we found this Eastern Bluebird. 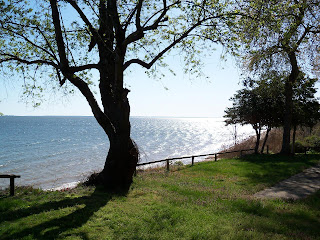 A shot from the cliff overlooking the bay.  The wind shifted from south at 30 mph to north at 20 as the front hit last evening.  The bay is still pretty choppy and stirred up, but I may give it a shot later this afternoon if it calms down some. 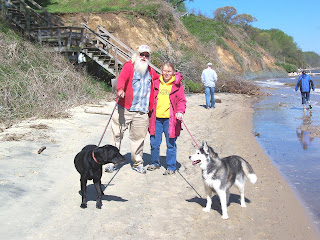 We know that spring is in full flower when the Snow Birds arrive back in Maryland, and the ultimate snow bird is our friend Joel Walton.   Joel spends winters in Key West and summers in Maine with his trusty black dog Red.  Joel is a retired Coast Guard officer, and a mostly retired Professional Pet Dog trainer. He's given us quite a bit of advice for Skye, and some of it we've even taken.

We met Joel today just after we had turned around, so we spent the rest of the walk catching back up.  Here he tries to convince me he's putting to moves on Georgia.  I don't trust him, but I trust her...
Posted by Fritz at 2:57 PM