Could a Big Greasy Breakfast Save Your Life? 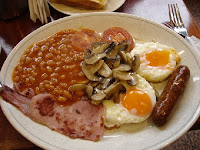 If you're a mouse, maybe.


It sounds like the recipe for a heart attack. But a fry-up followed by a plate of doughnuts could actually be good for the heart.

Fry up is apparently English slang for a full breakfast (pictured at right).


Research suggests that the odd greasy treat somehow boosts the heart muscle, reducing the amount of damage done when a heart attack occurs.

My memories of English breakfasts, from a trip I took there a few years ago, suggests that dying might be preferable to a long life eating a daily English breakfast.  The sausage in particular, just eewww.  And fried tomatoes never did anything for me, green or red.  I always assumed England conquered the Empire to find some decent food.  It's certainly the best explanation for their Indian adventures.


The U.S. researchers fed mice on a lard-based or normal diets for periods of 24 hours to six weeks and then looked at how they fared when they had a heart attack.Given the link between fatty food and heart disease, you might expect the lard-fed mice to have done the worst. Instead, those fed the fatty food for up to two weeks actually had the mildest heart attacks.

As somewhat of a believer in the high protein diet, and the pitfalls of the carbohydrate based diet, I suspect that it's not as bad a health threat as many would suggest, but I think we need to be wary of basing our diets on what's healthy for mice.

Email ThisBlogThis!Share to TwitterShare to FacebookShare to Pinterest
Labels: $#I*, food, health