...But not such a good day for fishing.

Barefoot and I had a date reserved with Walleye Pete to try fishing on the Susquehanna Flats, the big "knob" at the upper end of Chesapeake Bay where large stripers often gather in large numbers during spring to feed on the abundant herring, and get ready to spawn. I called Pete yesterday and asked for the fishing report, and his reply was "It sucks!" I called Barefoot and we consulted and decided to risk it anyway, both having taken the day off work.

A Google Maps view of the Flats

We left home at o'dark fifty nine, and met Pete at the dock in Perryville on the Susquehanna River. We left the dock a little after 6 AM, and motored out to southern end of the Flats at Sandy Point: 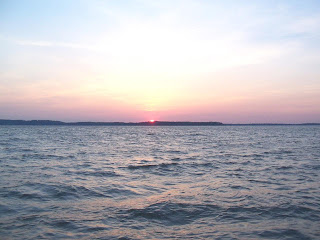 Looking across the mouth of the Flats to Turkey Point with the sun coming up over the trees at Turkey Point. 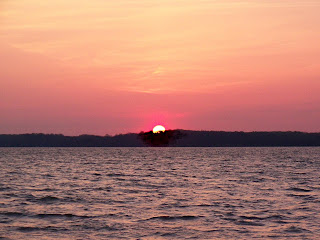 A little closer view of the sunrise.


We threw lures in the Sandy Point region a while to no avail and then headed off to the other side to take advantage of an incoming tide. 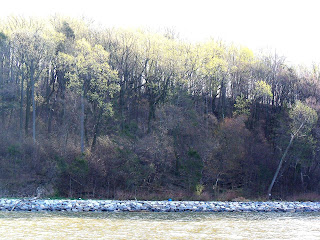 Over on the other side we fished along the shore and had the best fishing we were to have all day.  Barefoot caught one 21 inch striper (not shown), Pete had one on and lost it, Barefoot lost a mid sized large mouth bass, and we all had multiple bumps.  We also saw deer on the hillside, and heard Turkeys gobbling in the woods. 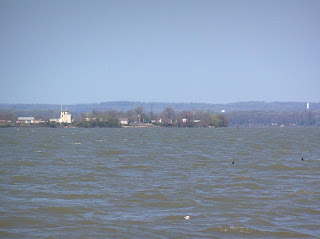 After trying numerous other places, we ended up back in the middle, somewhere between Sandy and Turkey Points, and ran into a huge mass of cormorants, diving and eating herring and being harassed by seagulls intent on forcing them to drop their prey so they could grab it.  We hoped to find masses of stripers underneath eating herring, but that was not to be.  A couple of cormorants and a gull in this shot (not the masses). 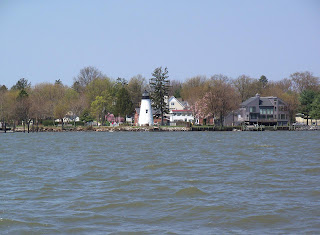 About noon, we decided to call it a half day and set a course to Perryville.  I took a few shots on the way. 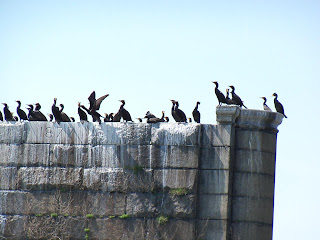 A shot of some cormorants sunning themselves on an old bridge pier (click to enlarge and see date on the pier).
Back at the dock, we met an old fishing friend we hadn't seen in a few years, and spent a while complaining about the sad state of the Striped Bass population.

We have another date with Pete in a couple weeks. Hopefully the fish will arrive by then.
Posted by Fritz at 6:04 PM