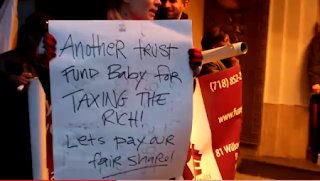 Rich Activists Push for Higher Taxes on Themselves


A few weeks ago, outside Midtown Manhattan’s famed Waldorf Astoria Hotel, protesters gathered to rally against Governor Andrew Cuomo’s proposal to cut funding for public services, while also cutting taxes for the wealthy. Organized by New Yorkers Against Budget Cuts, the marchers represented several organizations joining together to “Demand That Millionaires Pay Their Fair Share.”

But amidst the chants of “Not another nickel, not another dime! Bailing out millionaires is a crime!” on March 31 were two protesters holding a very unusual rally sign: “Another trust fund baby for taxing the rich! Let’s pay our fair share!”

You know, the government will take your donation, if you feel that strongly about it...  Of course, then you don't get to feel all moral without actually paying anything and you get to save on taxes at the same time!


Gilmore is the co-director of Resource Generation, a national nonprofit organization that supports and challenges young, progressive people with wealth to leverage their privilege and resources for social change... Resource Generation recently teamed up with another nonprofit that organizes affluent activists, Wealth for the Common Good, to form a Progressive Tax Campaign. They will be organizing and advocating a change in the policy, laws and perceptions of our tax system. Specifically, the campaign aims to draw attention to the social services that taxing the wealthy could fund, and advocates higher tax bracket rates for top income earners, as well as higher taxes on investment income.

If you're really worried about fitting through the eye of the needle, give it all to the government.  But then you'd have to learn how to work for a living.
Posted by Fritz at 10:16 PM