We're all tired of minor incidents being blown up to appear as major scandals. For example, two days ago Kellyanne Conway, the new bête noire of the left was attending meeting in the Oval Office, and someone asked her to take a phone picture of the meet. As the New York Times reports in truly fake news: Kellyanne Conway Casually Sits, and Etiquette Arbiters Take a Stand 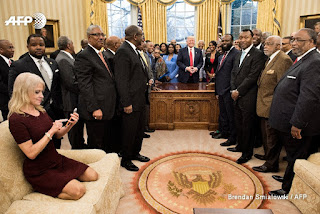 During President Trump’s meeting with dozens of leaders of historically black universities on Monday, Kellyanne Conway, the White House counselor, made herself at home in the Oval Office. She hopped onto a couch, sat back on her heels and tapped on her phone.

This impromptu manner of sitting is common in living rooms across America, but not in the Oval Office. And there are more important things underway in the White House: an ambitious budget, health care (it’s complicated!) and a presidential address to Congress on Tuesday. But Ms. Conway’s posture was all the kindling a hair-triggered public needed to ignite a battle over decorum.

For those watching closely — and millions are — this seemed like the latest flouting of protocol by an administration that has showed a penchant for spontaneity and a willingness to ignore unwritten rules of White House life. When Mr. Trump invited Justin Trudeau, the Canadian prime minister, into the Oval Office in early February, his daughter Ivanka, normally considered the most polished member of the family, was criticized for taking an impromptu seat at her father’s desk. On the other end of the spectrum, Stephen K. Bannon, the president’s chief strategist, has been targeted for dressing too casually. And the first lady does not yet live in Washington.

But Ms. Conway’s willingness to sit casually on a couch seemed a step too far. To Pamela Eyring, president of the Protocol School of Washington, whose programs focus on etiquette, it just looked a lot like a “rookie protocol mistake.” Ms. Eyring said the photos of Ms. Conway probably negated whatever message of unity Mr. Trump was trying to project.

“The whole media opportunity to show the good will and the collaboration showing what the president is trying to do is gone now,” Ms. Eyring said. “Let the media take the shot instead of you trying to stand on furniture.”

On Twitter, people categorized the episode as an outrage, an opportunity for laughs or an overblown controversy.

“Liberals are losing their mind because Kellyanne Conway is kneeling on a couch and ‘not treating furniture with respect,’” wrote Jack Murphy, who posts extensively on Twitter about the president. He then shared nine photos of former President Barack Obama with his feet propped up on desks and chairs in the White House.

Others said the faux pas was not about the desecration of furniture. Instead, they felt that Ms. Conway, who serves a president who has been known to make racially charged or tone-deaf statements, had shown disrespect while she was among dozens of black leaders.

“Now, you can’t expect us to take this ‘meeting’ seriously when this is the setting,” wrote DeRay Mckesson, a prominent figure in the Black Lives Matter movement. 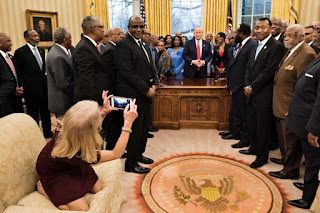 But as a slightly fairer picture of Kellyanne, shockingly from the Washington Post, showed she was positioning for a picture, not checking her phone:


. . .Manigault said, the Oval Office became packed as the university presidents and chancellors crowded around Trump for a photo op, which the official White House photographer, the press pool and Conway attempted to capture.

“There was nowhere to stand at that point,” Manigault said, so Conway got on the couch to get a shot.

Faux outrage at people "demeaning" the office has been played by both sides. As noted, Barack Hussein was criticized for putting his feet up on the "Resolute Desk." To those people I also say, "get a life!"
Posted by Fritz at 9:32 AM