But Are They Red? 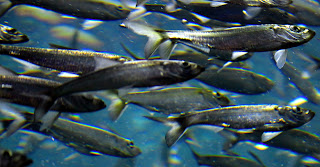 Scientists have a powerful new tool to help them “see” fish in the Chesapeake Bay’s murky tributaries, and it’s yielding some surprisingly good news about two of the estuary’s most troubled species.

“Imaging sonar” uses sound to help them view, and count, passing fish in dark or cloudy water. For the past few years, scientists with the Smithsonian Environmental Research Center have been deploying one of these underwater sound cameras in some of the Bay’s rivers to monitor spawning runs of alewife and blueback herring, collectively known as river herring.

The capabilities of the new electronics are revolutionizing science


One of the top catches in the Chesapeake Bay in the 1930s, river herring spawning runs have dwindled in most places, prompting serious concern that they may be disappearing across much of their range, which covers virtually the entire Atlantic Coast. Though their commercial importance has faded, alewives and blueback herring are still considered important forage for larger fish, including striped bass and bluefish. So, their demise could have a ripple effect on other species.

One of the reasons large numbers of Striped Bass show up well before the spawning season in Chesapeake Bay is chasing the herring and shad that return and spawn at lower temperatures.


No one knows for sure how many river herring are in the Bay, as fisheries managers lack the staff and resources to do a comprehensive assessment. But a SERC-led team of scientists deployed an imaging sonar device in the Choptank River in 2014 that captured images of the fish as they swam by. Based on the rate at which scientists saw the shadowy blips cross their computer screens, they estimated that as many as 1.3 million river herring swam upriver that spring to spawn.

That’s more than expected, and way more than state biologists had figured were there in the early 1970s, the last time anyone looked intensively at the Choptank’s herring runs.

“It was very good news that we saw as many herring as we did,” said Matthew Ogburn, a Smithsonian biologist leading the team that’s been studying the species’ spawning runs. They published their findings in November in the journal Transactions of the American Fisheries Society.

Indeed, the scientists said their estimates of 581,000 alewives in the river and 726,000 blueback herring suggest that the Choptank’s river herring run is on par with relatively healthy spawning migrations still seen in some major Northeast rivers.

That’s very good news for the Choptank, if verified and sustained. But it doesn’t mean the rest of the Bay’s river herring are out of trouble. 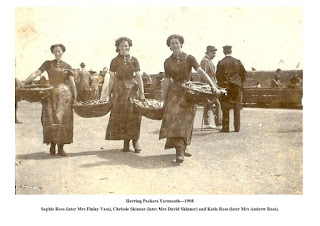 I hope this is really a change for the better, and not just a revelation that the herring run in the Choptank was never as bad as they thought.

I found this especially interesting:


One of the big issues with all types of sampling, Ogburn said, is that if not frequently checked, they can miss a big chunk of the spawning run. Fish tend to move in spurts, prompted by weather conditions and water flows. During a 2013 survey, for instance, he said, the sonar detected 100,000 fish surging upriver in a single four-hour period, and a similar pulse the next night. Other sampling methods might have missed those fluxes.

We see the same "spottiness" with Striped Bass at the power plant this time of year. Here in huge numbers one day, and all but gone the next. Is it because they're following large schools of bait that are moving in waves like this?
Posted by Fritz at 7:13 PM