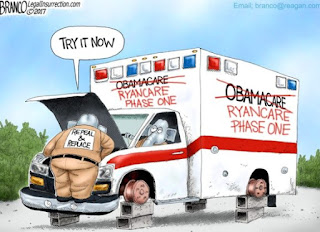 The quest for a new healthcare program by the Republican congress is going just about as awful as you might have expected. The Cato Institute makes the case for repeal without replace: Full Repeal Would Cover More People than House GOP’s ObamaCare-Lite Bill. Sen. Tom Cotton is no fan either: Tom Cotton just exploded the GOP's lies about RINOcare: 'There is no 3-step plan' “It’s just politicians engaging in spin.” It's what they do. Moderate House Republican announces she won’t vote for GOP health-care bill. Ileana Ros-Lehtinen of Florida. Via Wombat-socho's "In The Mailbox: 03.14.17",  Powerline claims the CBO analysis suggests GOP " Replacement Plan is Politically Unsustainable. At least one poll shows the GOP Plan to Encourage Health Coverage Unpopular With Voters. Frankly, 30% more if you try to sneak in after you get sick seems like too little to me. Otherwise, the poll was pretty evenly split. Fox News poll: Soaring optimism on the economy under Trump — but 35/55 approval on handling health care.  According to the Washington Post Trump loyalists sound alarm over ‘RyanCare,’ endangering health bill. I distrust the Post when it attempts to give advice to Republicans. Again, the WaPo The cost of failure on health care? It may be the rest of Trump’s agenda.. Like they think that's a bad thing. They don't. For them, this would be good news. More WaPo (bias alert), Ryan: Health care plan must change to pass the House and White House tries to salvage GOP health-care proposal as criticism mounts. Heat Street looks to Life After Ryan: Sen. Cotton May Soon Be Congress’ New Bossman and No. 1 Heartthrob “We’re out of excuses”: Cruz warns GOP that they’ll be “laughing stocks” if they don’t repeal ObamaCare. True dat! According to Byron York  Donald Trump is a reluctant Obamacare warrior. He unsuited to be a legislator. Trump on the House’s health-care bill: “We will take care of our people or I’m not signing it” He didn't get elected for being a conventional Republican. 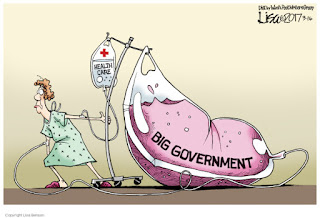 Meanwhile the original Obamacare continues to circle the drain. One popular option: Let it die? How the GOP could just wait for Obamacare to ‘collapse.’ I can understand not wanting to take ownership of the problem.  Obamacare sign-ups fall below expectations, last year's levels. You can only fool so many people for so long. More analysis at Hot Air's ObamaCare enrollments miss the mark again — for the last time? The Washington Times thinks Democrats need to help fix the Disastercare they created. I wouldn't hold my breath. Real Clear Politics believes Dems See Trumpcare Fallout as 2018 Opportunity. I have no doubt they'll muck it up as much as possible for political gain. Politico whines tha Trump May Be Sabotaging Obamacare while Dana Milbank rages that Obamacare isn’t failing. It’s being destroyed by Republicans. Well, they didn't like the concept, and they didn't vote for it, either. According to the New York Times Obamacare Isn’t in a ‘Death Spiral.’ (Its Replacement Probably Won’t Be Either.) Hot Air swears Politico’s story on Trump sabotaging Obamacare is a mess. Sanders Can’t Say Where He Gets His Info That ‘Thousands Will Die’ if Obamacare Is Repealed. Out of his ass, of course. Why should he be different than any other politician?

By way of Wombat-socho's "In The Mailbox: 03.16.17" Megan McArdle has Obamacare Isn't Going to Fix Itself


The current version of the Republican bill may not be better than the status quo. But the status quo is not good. And everyone, Democrat and Republican, had better start thinking now about how far they’re willing to go to fix it.

And in actual news, Obamacare replacement bill passes Budget Committee by one vote. It lost three Republicans. Not a sign of overwhelming support.
Posted by Fritz at 2:49 PM