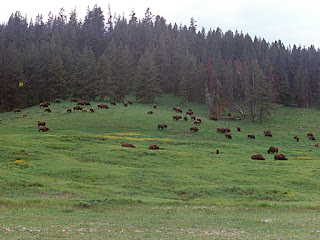 Via Watts Up With That: Why did the buffalo cross the land bridge? Because the grass was greener on our side!

New research by Professor Beth Shapiro of the UC Santa Cruz Genomics Institute and University of Alberta Professor Duane Froese has identified North America's oldest bison fossils and helped construct a bison genealogy establishing that a common maternal ancestor arrived between 130,000 and 195,000 years ago, during a previous ice age.

Shapiro, Froese and colleagues used new techniques for ancient DNA extraction and sequenced the mitochondrial genomes of more than 40 bison, including the two oldest bison fossils ever recovered. Comparing these genomes to additional Siberian and North American bison clarifies the earliest parts of the bison family tree. 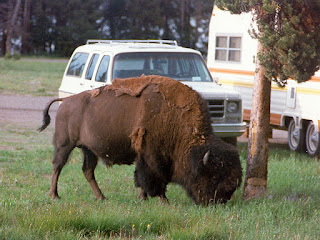 A couple of old photos from our 2008 trip to Yellowstone. Bison were everywhere.

"Until recently, the fossil records from different parts of North America disagreed with each other, with a few fossil localities suggesting that bison arrived millions of years ago, but most old fossil sites showing no evidence of bison at all," Shapiro said. As new methods to date fossil localities emerged, the ages of the sites in North America with purportedly very old fossil bison have all been questioned, leaving the timing of bison arrival a mystery. 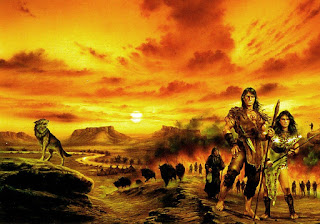 The advances in population ecology and paleontology since the advent of DNA sequencing is just amazing.


The new study explored fossil locations in Northern North America -- the entry point for bison into the continent -- and extracted DNA from two of the oldest bison fossils known on the continent. One from Ch'ijee's Bluff in the Vuntut Gwitchin First Nation in northern Yukon, and another from Snowmass, Colorado.

"Bison used what is called the Bering Land Bridge -- a vast connection of land between Asia and North America -- to cross from Asia into North America. The land bridge forms during ice ages, when much of the water on the planet becomes part of growing continental glaciers, making the sea level much lower than it is today," explained Shapiro. "After they arrived in Alaska, they spread quickly across the continent, taking advantage of the rich grassland resources that were part of the ice age ecosystem." 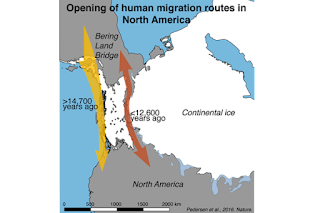 This map shows the most recent glaciation, but the same sort of features also occurred in previous glacial period, which took place approximately every 100,000 years for the last million years or so.


While bison were not introduced by humans to North America, their rapid spread and diversification are hallmarks of an invasive species -- and part of what make bison's role in the Great Plains ecosystem so significant. "Bison arrived in North America and quickly came to dominate a grazing ecosystem that was previously reigned over by horses and mammoths for one million years," said Shapiro.

As noted by David Middleton at WUWT, Does this mean Bison are invasive species and that the old Buffalo hunters were doing God's work by trying to eliminate them?