A small monster to be sure: Beachgoers warned after creepy looking fish appears in Virginia Beach: 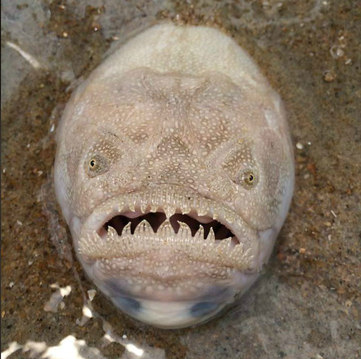 Organizers with the East Coast Surfing Championships, or ECSC, shared a photo last week of the fish, a northern stargazer, popping its head up from the sand.

"A friend of ECSC came across this stargazer while walking in Virginia Beach," organizers said in a Facebook post. "They do not pose any real threat to humans, but they sure look menacing."

Stargazers are one of the world few "electric" fish, capable of making a shock strong enough to stun prey, although they are not strong enough to significantly hurt humans. The nasty looking "teeth" in the photo are fleshy flaps, although I don't doubt they have real teeth of some sort lurking in their mouths. They also have a spine with a venom sac on their dorsal fin.

While found in southern Chesapeake Bay, I doubt they would tolerate the low salinity of our region, although I have been surprise before.
Posted by Fritz at 8:07 AM