Reason #5497 That Trump Was Elected 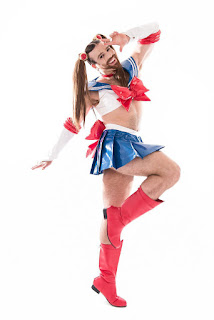 
It's all fun and games until there's a burly guy in your bathroom peering through that one-inch gap in the stalls when you've got your panties around your ankles. What we all said would happen has happened, and at Disneyland no less. When the transgendered came out swinging for the right to use whatever bathroom they want to, some of us said this is not a good idea. And our reasons weren't that we don't want men who live as women to feel comfortable or safe but because we knew (those of us who were born women and live with the very real threat of male violence every day) that predators would take advantage of this new "anything goes" policy and waltz into our safe spaces to violate us and no one would be able to do anything about it.

And now it's happened. Kristen Quintrall Lavin at The Get Real Mom recounted her terrible experience.


I was off to the side waiting with the two boys, when I noticed a man walk into the restroom. My first thought was “Oh shit, he’s walked in the wrong restroom by mistake. lol” He took a few more steps, at which point he would’ve definitely noticed all the women lined up and still kept walking. My next thought was, “Maybe he’s looking for his wife…or child and they’ve been in here a while.” But he didn’t call out any names or look around. He just stood off to the side and leaned up against the wall. At this point I’m like, “WTF? Ok there is definitely a very large, burly man in a Lakers jersey who just walked in here. Am I the only one seeing this?" I surveyed the room and saw roughly 12 women, children in tow, staring at him with the exact same look on their faces. Everyone was visibly uncomfortable. We were all trading looks and motioning our eyes over to him…like "What is he doing in here?” Yet every single one of us was silent. And this is the reason I wrote this blog. 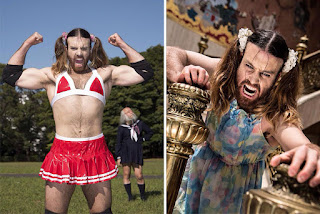 If this had been 5 years ago, you bet your ass every woman in there would’ve been like, “Ummm what are you doing in here?”, but in 2017? The mood has shifted. We had been culturally bullied into silenced. Women were mid-changing their baby’s diapers on the changing tables and I could see them shifting to block his view. But they remained silent. I stayed silent. We all did. Every woman who exited a stall and immediately zeroed right in on him...said nothing. And why? B/c I and I’m sure all the others were scared of that “what if”. What if I say something and he says he "identifies as a woman" and then I come off as the intolerant asshole at the happiest place on earth? So we all stood there, shifting in our uncomfortableness…trading looks. I saw two women leave the line with their children. Still nothing was said. An older lady said to me out loud, “What is he doing in here?” I’m ashamed to admit I silently shrugged and mouthed, “I don’t know." She immediately walked out, from a bathroom she had every right to use without fear.

And this is why pushing for laws to allow anyone to use whatever bathroom they identify with (this week) is absurd and dangerous. Before 2017 we shared the ladies' room with transgendered people and we either didn't know or never said anything because we knew we weren't in danger. It's something you don't talk about. You just pee and leave. But by making a capital case out of it and literally inviting anyone into female safe spaces, the government has put women and children at risk from peeping toms, rapists, pedophiles, drunks, and vagrants. Predators already capitalize and count on women's reluctance to fight back or speak out. Now it's even worse because if you do speak up, you will be labeled transphobic and predators know it.

I wonder if the "trans" guy, if that is indeed what he was, was fishing to get kicked out the restroom so he could sue Disney for bias, for his mental distress, and to make his point about the freedom of trans to do their business where they want to as their moods suit them, much like the gays vs. bakery case. I would expect such a move soon.

But, ladies, you're on your own. I'm tired of fighting the rear guard action. If hairy burly men want to pee sitting down in your bathroom stalls, it's up to you to take a stand. I promise not to complain, and try not to laugh if men with vaginas try to use the urinals in ours. Vote in somebody who cares, over and over. I will.
Posted by Fritz at 11:22 AM