The big news is that the stupid party (as opposed to the evil party) couldn't get it's act together and agree on how to repeal and replace or fix Obamacare, after having voted to repeal it multiple times while Obama was in office to veto it, and ended up delaying the vote scheduled yesterday until . . . who knows when. For the scoop, we go to WaPo's Dan Balz for the unbiased view (just kidding): A postponed health-care vote, a big GOP embarrassment and no good options ahead:


Thursday was supposed to be a glorious anniversary for President Trump and the Republicans. Seven years after President Barack Obama signed the Affordable Care Act, Republicans were poised to take the first concrete step toward repealing and replacing that law. Instead, Thursday produced an embarrassing setback that left the way forward far from certain. 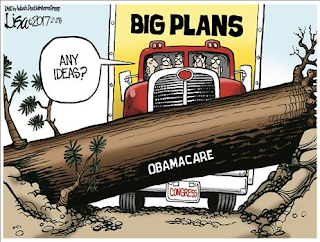 So what led up to this? From Reason:  Republicans Are Rushing To Vote on a Health Care Bill They Haven’t Read. They Learned Nothing From Obamacare. Measure twice before cutting. The Republicans Relearn Politics. D-.

From the beginning, the Republicans have been divided over how to proceed, with the Rand Paul wing wanting to end it, not mend it, and the moderate wing wanting to tweek it, to make it slightly less authoritarian and put their own brand on it. Senate Republicans: From 'hell no' to 'not so sure' on Obamacare. Ryan: Health care bill must do more for older people. It's been great entertainment if nothing else. Republicans Work to Repair GOP Divide Over Health-Care Overhaul. Price on AHCA: Everything’s on the table — except a clean repeal. No clean break? Right Versus Right: Where Conservative Groups Stand on TrumpCare. All over the place. Rubio Doesn’t Want “A Republican Version of Obamacare”  AHCA was on a knife edge. Now it may have fallen off. Or at least got cut really badly. 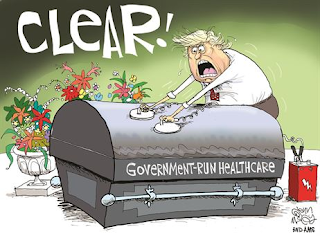 By way of Wombat-socho's "In The Mailbox: 03.20.17" the sensible Megan McArdle: Trump’s Budget Asks The Right Questions For Conservatives


Conservatives are often accused of “hating government”, and some do. Still, there is a coherent and compelling center-right analysis that doesn’t simply blindly oppose federal spending, but asks of it a few questions: 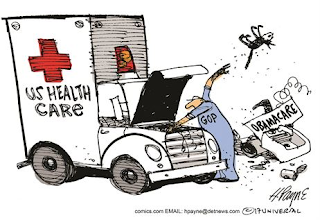 And from "In The Mailbox: 03.23.17", Liberal Judges Unwittingly Declare Obamacare Religious Mandate Unconstitutional. An interesting arrgument, if only judges were honest. JD Rucker – Just Repeal. And correct on the first try, Just One Minute with Perils Of Pauline, Trumpcare Edition.

A few short days ago:  Ryan on healthcare plan: 'We're right where we want to be', while Conservative House Republicans Say They Have Votes to Block Health Bill and Paul predicts GOP healthcare plan will fail says  ‘Easily 35 No Votes’ Against Paul Ryan’s Obamacare 2.0, ‘I Would Predict They Pull Bill, Start Over’. An Immigration provision cut from Obamacare rollback, angering conservatives. Like they needed another reason.


The provision would have allowed the Treasury Department to access data at the Department of Homeland Security to verify that healthcare tax credits went only to U.S. citizens and legal permanent residents, not to illegal immigrants.

In a largely procedural move, it was dropped from the bill after the Senate Parliamentarian determined that the Senate Finance Committee, which handles tax credits under the bill, does not have purview over the Department of Homeland Security. 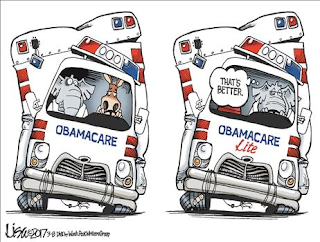 House Obamacare repeal DOA in the Senate. McConnell warns Senate Republicans: I’d hate to be you if AHCA fails. Failure to Repeal Obamacare Would Endanger Tax-Cut Goals, Some in GOP Warn. Hmmmm...: Mike Lee Says Senate Parliamentarian Informed Him It Might Be Possible to Undo Obamacare Regulations Via Reconciliation. What goes around comes around.  Study: Senate can repeal Obamacare's regulations through reconciliation, with only 51 votes. Surprise: House ready to change health-care bill after learning Senate reconciliation rules might let them repeal more of ObamaCare. Kochs pledge millions to GOPers in 2018 -- if they vote no on health care bill. Only millions? Cheapskates! 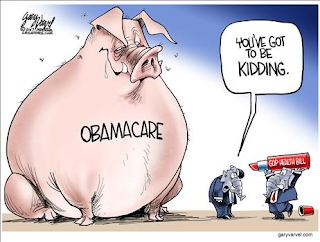 Meanwhile Obamacare itself continues to sink into death spiral: Higher Obamacare premiums in Arizona led to significant decline in enrollment. I hope the Republicans can agree on something more realistic.
Posted by Fritz at 9:44 AM