I found a small Megalodon tooth today on a walk down to the beach with Skye. Lousy cell phone picture: 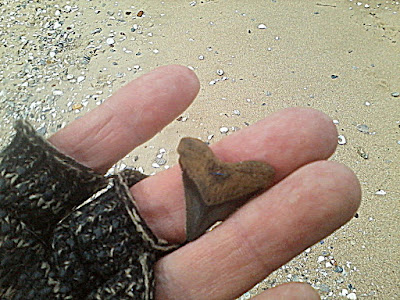 Discovery: People have been finding Fossil Shark teeth, including the large Megalodon teeth, throughout history:

Pliny the Elder, around 70 AD, beleived shark teeth were triangular objects dropped from the sky during lunar eclipses.

In the middle ages, Europeans thought they were "tongue stones" or petrified tongues of dragons and snakes. They were worn as pendants and used in medicine.

Native Americans used shark teeth as necklaces and even tools such as scrapers.

The actual name "Megalodon" was named by Louis Agassiz in 1843.

Location: Nearly Global: Megalodon lived globally in the warm oceans of the Miocene and Pliocene. Fossils of C. megalodon have been found on every continent except Antarctica

It is not alive today, and has been dead for millions of years.

It has the largest teeth of any shark. Although the largest tooth from megalodon is a a little over 7 inches, A more common size for megalodon teeth is between 3 and 5 inches.

The more reliable body size estimates go up to around 60 feet. It's possible that slightly larger ones existed. The average size of a megalodon was around 33 feet.

megalodons were a little larger than the modern day Whale Shark, and over twice as large as a Great White shark. Sorry, it was not an 80 to 100 foot beast!

It was the a most massive shark to ever live. Evidence shows it ate Whales as it's diet.