Placing the Wrong Blame for the Black Rail Decline?

A small water bird, rare to begin with, is almost extinct in the Chesapeake Bay region, and scientists and managers reach a comfortable conclusion as to the cause of it's decline; Climate Change!


The sparrow-size bird lives deep in marshes that are hard to access, and it is most active in the wee hours of the morning. Even then, it tends to scamper through dense vegetation, rather than fly — some call it a “feathered mouse.”

“We know almost nothing about this species,” said ornithologist Bryan Watts, director of the Center for Conservation Biology in Virginia. “It’s very tiny and incredibly secretive. Even most bird watchers have never seen this species before.”

Now, even hearing their call is unlikely. Its habitat, a delicately balanced zone deep within coastal marshes, is being flooded by the rising waters. And the Eastern black rail is disappearing fast — potentially becoming the first victim of sea level rise around the Chesapeake Bay and other areas of the East Coast.

Watts recently completed an exhaustive review of literature about the black rail, going back more than 100 years. His findings on the status and trends of its rail population were compiled in a 148-page report released in 2016.

“They are sort of evaporating around us,” Watts said.

The decline has been rapid and unexpected. Only 50 years ago, part of Dorchester County on Maryland’s Eastern Shore was a world-renowned hot spot for birders seeking a glimpse of the elusive black rail. Today, the black rails are gone from Elliott Island, and only a handful are left in the state. None have been seen in Virginia’s coastal marshes for a couple of years.

Their exact number doesn’t make much difference, Watts said, because the downward trend is so strong — Maryland numbers have fallen 90 percent in just 25 years.

“This species is not going to be sustainable in its landscape in the face of sea level rise,” he said. “It will be lost. Maybe in five years, maybe in 10 years. But it’s on the way out.”

So let's looks at sea level in Maryland (again).

A slow steady rise of about 3 mm a year, about half of which is due to natural and man made land subsidence, and not increasing ocean volume from melting ice. No sign of acceleration over the past 100 years.


The bird is listed as endangered in both Maryland and Virginia, as well as several other states along the Atlantic Coast. The U.S. Fish and Wildlife Service is considering protecting it through the federal Endangered Species Act and is expected to make a recommendation in September 2018.

Historically, the black rail has received little attention. Along with its deep marsh habitat and nocturnal activity, the black rail is quite small. Its body is about 6 inches long, with dark feathers and white speckles on its wings, back and abdomen. It has brilliant red eyes. But hardly anyone sees it — even professional ornithologists.
. . .
Black rails were once found from Texas up the East Coast as far as Massachusetts. Over time, they have suffered major habitat loss as marshes were buried to make way for urban growth. Places such as Cambridge, MA; Queens, NY; Atlantic City, NJ; and Baltimore once supported black rails. The historic ditching and draining of marshes eliminated more habitat. 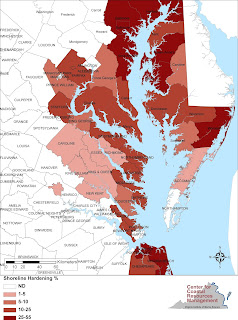 And there's the real cause of the demise of the Black Rail, hidden in plain sight. Up and down the coast, marshes have been drained, or coastlines hardened in such way that the marshes dry up.


But scientists believe the recent, rapid demise of black rails is linked to rising water. Black rails live in high marshes that, with slightly higher elevation, typically escape the daily tidal over-wash. But the birds forage for invertebrates, such as water beetles, in areas that have wet soil or even a thin covering of water.

It’s a narrow band that Watts describes as a “hydrology tightrope.” With sea level rise, he said that he believes the nests are increasingly inundated by storms and unusually high tides. If a nest is ruined in a single year, the population can rebuild the next year. But if nests are drowned more frequently — and eggs along with them — the birds gradually disappear.

The birds can adjust by moving upslope but, because marshes are relatively flat, even a small amount of rising water can push them out of suitable habitat toward trees, roads or stands of invasive phragmites. “If the water gets up 2 centimeters, it is not just inundating the edge of the marsh, it is inundating the entire marsh,” Watts said. “Once it hits that tipping point, you are effectively flooding the entire marsh.”

However, marshes, given some place to go, rise with sea level. Sea level has been rising steadily since the end of the last ice age, and Black Rails either evolved recently, or thrived through some of the most rapid rises in sea level the world has ever seen: 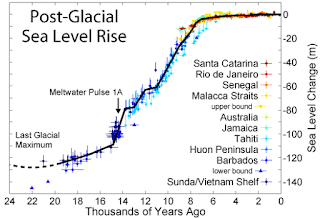 In the Saxis Wildlife Management Area on Accomack Island on Virginia’s Eastern Shore, black rails were last located at the tree line, and then they were gone.

The decline has been rapid. In 1991–92, a DNR survey in Maryland’s portion of the Bay recorded 180 black rails. “We found more than we expected,” Brinker said. “They were widespread. It was the third most frequently encountered rail in the marshes of the Chesapeake Bay.”

In 2007, the DNR and the Center for Conservation Biology, which is affiliated with both the College of William and Mary and Virginia Commonwealth University, collaborated on a Baywide survey. They found just 50 calling males in Maryland and Virginia combined. “That was the first indication that we had that the population was collapsing,” Watts said.

Birders had been reporting a decline, Brinker said, “but the magnitude of the change sort of hit us in the face.” A 2014 survey found just 10 individuals — eight in Maryland and two in Virginia.

That makes it sound like something else happened. A new predator, a newly introduced disease (West Nile Virus perhaps?), but not a sudden change related to slowly changing shorelines and land uses.


The decline isn’t limited to the Bay. Black rails have largely disappeared at the northern edge of their range, with “catastrophic” rates of decline in New Jersey, Delaware and North Carolina, according to Watts’ status report, which was prepared for the upcoming federal endangered species review. South Carolina had a slower rate of decline, but still more than 4 percent each year.

According to Watts’ report, the total number of breeding pairs along the Atlantic Coast is between 455 and 1,315. Their status might be better in Florida and Texas, both of which have large amounts of potential habitat, but many of those areas have not been surveyed.

In those two states, “we have a huge amount of uncertainty,” Watts said.

Biologists, state and federal agencies are coordinating to conduct surveys in those and other areas in the next two years.

Historically, black rails were also found at some inland sites in the Eastern United States that simulated conditions found in high marshes, such as hayfields adjacent to river flood plains. But over time, most of those locations have also disappeared, largely because agricultural practices have intensified and altered the habitat, Watts said.

Black rails are also found in the Caribbean and in Central America, but little is known about their status.