Get ready for Calexit! Now Nigel Farage and the 'Bad Boys of Brexit' set their sights on splitting California in two

The 'Bad Boys of Brexit' who led the campaign to break Britain away from the European Union have taken on a new exit challenge: splitting California into two states.

Former UKip leader Nigel Farage and Leave backer Arron Banks have just returned from the United States, where they helped raise $1million (£800,000) for a 'Calexit' campaign, which would split California into two eastern and western regions.

There are several 'Calexit' campaigns competing for a referendum in the United States, with one aiming to remove the state from America entirely as a response to President Donald Trump being elected last year.

Farage and Banks, who led the 'Leave.EU' campaign, appear to be pitting the eastern, more rural side of California against the western 'coastal elite' liberals in Los Angeles and San Francisco.

Let's take a look at the map of the propose split: 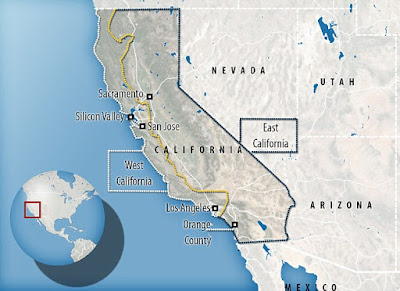 I'm curious why "East California" contains Orange County and San Diego. While Orange County in the past was a bastion of conservatism, I think those days are long gone. Putting San Diego in the east side, however, does at least secure the border. Let's compare with the results of the 2016 election of Donald Trump by counties: 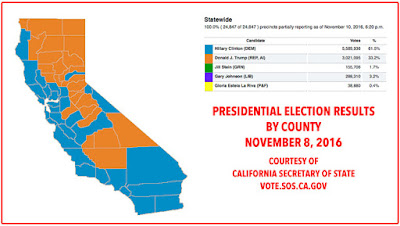 You see the big chunk in Southern California, which is, no doubt driven by the coastal populations, so if you split the big counties, Los Angeles, Riverside, and San Bernardino by precinct, you might get something like their map. And hey, we get get Crescent City? (Now what do we do with it?). It looks like they get Fresno, though. Lucky them.

There is some precedent for such a split. At the start of the Civil War in 1861, the mountain counties of Virginia voted to become West Virginia, which stuck when the North won.

The Western side of the state would likely continue to vote Democrat in elections.

Farage and Banks' goal is to hold a referendum during the US midterm elections in 2018, according to The Sunday Times.

This strikes me as pretty unlikely, but not as unlikely as California declaring independence from the US.
Posted by Fritz at 7:43 PM