Continuing the strange story of the mysterious EMdrive, which appears to defy Newtons Law, and produce thrust without reactions mass: Could Dark Matter Be Powering The EMdrive?


For every action, there's an equal and opposite reaction. This formulation of Newton's third law has two very important modern consequences: one, that there's a physical quantity that's always conserved in the Universe (momentum), and two, that the laws of physics are the same irrespective of your position in space. This has a huge slew of implications, including that if you want to power a device to change its motion, you need to push against something. This could be exhaust from a rocket, tires pushing against a road, train wheels on a rail-line or even photons reflected off a sail. The one thing that's forbidden is a reactionless drive: an action without a reaction. That's exactly what the EMdrive -- the "impossible" space engine just verified by a NASA test -- claims to be. If it truly works as advertised, it violates the laws of physics. But there's a possible loophole: perhaps there is a reaction, and we just don't detect it. Perhaps the reaction occurs, but it's occurring due to dark matter.

According to the standard model of cosmology, the majority of the matter in the Universe isn't in the form of atoms, or of any known particle. Rather, the overwhelming majority of mass -- by a 5-to-1 margin -- is in the form of dark matter. Dark matter doesn't collide, annihilate or otherwise interact with either itself or other, normal matter under any known circumstances, but rather interacts only gravitationally. After 13.8 billion years like this, it forms a vast, diffuse cosmic network of gravitational structure, and forms huge spherical haloes more than a million light years in diameter that contain galaxies like our own. This means, all told, that dark matter permeates every square centimeter of our galaxy, including existing -- albeit in small densities -- inside every object on Earth, including our own bodies. 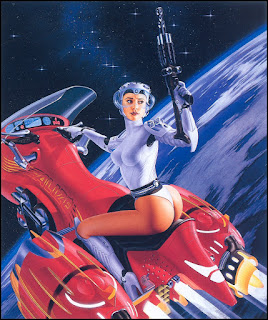 How would it work? At any point in time, there are dark matter particles passing through all regions of space, undeterred by the presence of matter or other Standard Model particles. Inside the electromagnetic cavity, photons of a particular frequency bounce around in all directions, conserving momentum and generating no thrust. But if photons moving in a particular direction -- towards the "back" of the cavity, for example -- are likely to strike a dark matter particle, three things ensue: 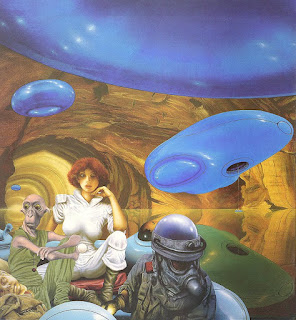 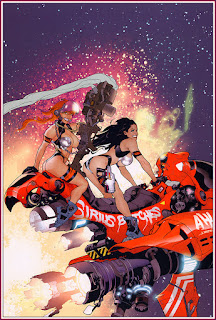 Momentum is conserved because the dark matter carries it away, equal and opposite in magnitude to what the cavity absorbs.

I really like this. It preserves Newton's Law, which has held up pretty well until now, shows a way forward to detecting dark matter directly, and offers a way to get to the stars (without throwing everything away as reaction mass). It does, however, have some drawbacks. Even if dark matter outweighs "our matter" 5 to 1, its spread rather thing (ours, by contrast, is quite lumpy), and the amount of thrust must ultimately be limited by the amount of dark matter the engine "runs through", although I doubt the engine as now contructed is anywhere near optimal.

Hmm, does this mean it speeds up like a ram jet as it accelerates? I'll leave that question to the real physicists.

Wombt-socho has "Rule 5 Sunday: Maid of Meat" up and running at The Other McCain.
Posted by Fritz at 8:09 AM