If you only read one piece on the current mediagasm about "fake news", it must be Ace's fine rant, On Media Lies and Political Lore. Just a taste (a big taste of a much larger piece):


The media is always on patrol to debunk such bullshit political lore coming from the right side of the political aisle -- and make fun of right-wingers for believing such nonsense, and claim such nonsense has real consequences in life, so if you're spreading such lore, you may be killing people, for real!

That's why they're currently in such orgasms over the #PizzaGate shooter. #PizzaGate sure sounds like Internet Detective nonsense to me, but the media has seized on this one story as a way to deflect from the fact that they've been pumping out their own FakeNews all year -- and all decade, in fact. **

Criticizing amateur news-sleuths is a lot more fun for the media than explaining why so-called professionals are so amateurish and biased.

But back to the lore: the media wants to find every piece of rightwing bullshit, rightwing lore they can and show how totally false fake falsity-false Lie it is.

But notice they never challenge any leftwing lore.

In fact, they're the most prominent purveyors of such fare.

And of course they don't want to talk about that.

"Hands Up, Don't Shoot" -- the lore that Michael Brown was an innocent bystander, raising his hands in surrender as an Evil White Cop executed him for being black -- was a lie from the start, concocted by Brown's partner-in-crime (literal partner in crime -- he was present during the bodega robbery earlier that day) and then spread by a media just looking for stories that would illustrate their Narratives that we need to elect Democrats. 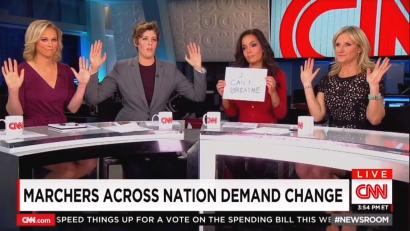 Michael Brown's mother was invited by the Democratic National Convention to speak at Hillary's four-day nominating commercial -- and she stood with parents with sons who arguably or even probably had been killed in questionable circumstances.

Michael Brown had not been killed in questionable circumstances -- even Obama's corrupt DOJ had to admit that. Yet there she was, because leftwing political lore still deemed Michael Brown a Gentle Giant and Innocent Victim, and it didn't matter what the actual facts of the matter were.

The media said nothing about it. They praised the folks on stage for their strength. They did not criticize Hillary Clinton for putting on a pageant containing Fake News and provable lies.

Lore that excites conservatives -- and which may be necessary for building party unity among conservatives -- must be eradicated. Michael Flynn's son must be chased off of transition teams for believing such Vicious Lies that Have Consequences.

The media blesses such lies with silence, tacitly approving of the lie.

There were no fact-checkers on the DNC Tragedy Pageant.

And this is all based partly on the #FakeNews that Michael Brown himself was assassinated by cop.

Fake news has consequences, Media -- or do those consequences not matter when they are visited upon people outside of the progressive coalition?

As someone said, journalism is about covering important stories. With a pillow, until they stop moving.
Posted by Fritz at 9:49 AM