Maybe They Should Put Them on Milk Cartons 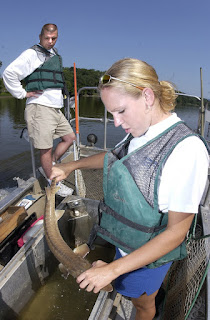 It wasn't until he became a student at Virginia Commonwealth University that Balazik discovered that sturgeon, the massive fish that have roamed waters both marine and riverine since prehistoric times, still called the James home. After centuries of overfishing of the species in order to produce caviar from its precious roe, sturgeon had been quietly making a comeback in the Chesapeake Bay thanks to a sturgeon fishing moratorium passed in 1974 by Virginia and a four-decade ban instituted in June 1998 by the federal Atlantic Marine Fisheries Commission.

But despite those gains, one puzzling mystery remained: Where were all the juvenile sturgeon?

"We should be catching lots of juveniles," said Balazik, who now works as a biologist at VCU's Rice Rivers Center across the river from Jordan's Point. But after 10 years of sampling the waters of the James and pulling out some 200,000 fish and more than 600 adult sturgeon, no young had turned up. 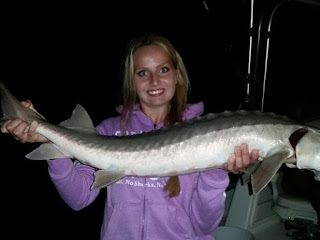 Maybe they're not sampling where the juvenile fish hang out.


That is, until this November, when Balazik unexpectedly netted two juveniles not far from Rice Rivers over a two-day period.

"All of a sudden ...; a 16- or 17-inch sturgeon came over the side of the boat," the researcher recalled. "I sat up there and looked at it for close to 5 seconds - which is kind of a long time when you think about it - in a state of shock."

The discovery of a second juvenile the following day only cemented the importance of the catch. "Once is luck: it's hard to put a lot of emphasis on one fish. But to find two fish in almost the same exact spot, it's like we're onto something," Balazik said.

The scarcity of juvenile sturgeon in Virginia waters where they once flourished remains a problem for scientists. As the sturgeon population has begun rebounding along the East Coast, juveniles have appeared in predictable numbers along the coasts and in the rivers of states including New York, Delaware, South Carolina and Georgia. But until this November, they seemed to be completely absent from the James and York rivers. 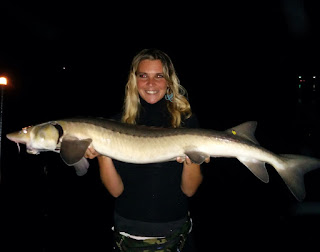 The reason why isn't clear. Scientists know that the fish are trying to spawn, and that they're producing viable eggs and sperm. And while the hard, bare habitats where sturgeon prefer to spawn have become scarcer over the years, plenty of suitable sites still exist. The James, in fact, used to be the country's second-biggest sturgeon producer thanks to its intersection with the fall line, a circumstance that produces plenty of rock surfaces perfect for spawning.

Various theories for the absence of the juveniles in the James have been floated: there might be an unidentified chemical in the water. The overly abundant blue catfish population might be outcompeting the juvenile sturgeon for food. Shipping could be harming the species' numbers.

"We have to think about every possible issue until we can find something we can sink our teeth into," Balazik said. But so far, "There's no evidence to really support anything, and that's what's driving us crazy. There's no smoking gun to really find any strong leads."

When in doubt, blame Bush. If that doesn't stick, blame Trump.

The good news about sturgeon is that they seem to be making a comeback in the Chesapeake, The bad news is that comeback is slow and spotty. Sturgeon are a relatively rare, slow growing species, so a low reproductive rate may be sufficient in the long run. Even in the Hudson, which relative to the Chesapeake has a booming population of sturgeon, juveniles are relatively rare.

Wombat-socho has "Rule 5 Sunday: The Week Before Christmas" ready for your viewing pleasure at The Other McCain.
Posted by Fritz at 11:30 AM