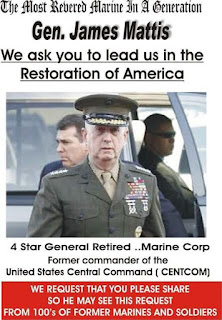 . . . by my inside guy at the Pentagon: Welcome, Mr. Secretary


At one point during his election campaign, President-Elect Donald Trump promised to spend the first hundred days on the job restoring the U.S military. And following the endless unsuccessful wars in Afghanistan and Iraq, restoring it certainly needs. Now he has come up with the man who is supposed to do the restoring: four-star Marine Corps General (ret.) James Mattis.

To imitate the language of the Old Testament, I shall not list “the rest of the General’s acts, and all his might, and all that he did.” They can easily be found on the Net. A few points, however, are worth taking note of. First, he is immensely experienced, having made his way up by participating in practically every war the U.S has fought from 1972 on. Second, as a high-ranking Marine he is intimately familiar with operations “in the air, on land and sea” (the Marine Corps anthem) and not just with one of the three as so many army, navy and air force generals are. Third, along with general David Petraeus he was responsible for America’s counterinsurgency doctrine. Precisely that which, in this day and age of what I once called “non-trinitarian warfare,” is the most important and the most necessary of all. Fourth, he cares for his troops. Fifth, he is a man of considerable learning such as is rarely found among his fellow officers (having lived with them, I should know). Last not least, he has no fear of speaking his mind. A quality which, in today’s politically-correct world, is as hard to find as diamonds.

Entering office, the General will have his work cut out for him. . .

His words "He has to overcome his lack of experience in the Pentagon but yes, I am all in."
Posted by Fritz at 4:22 PM