The Good and Bad of Phrag 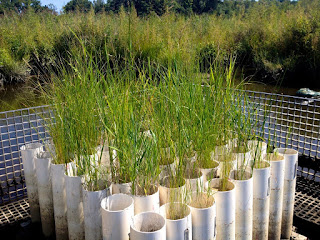 Jekyll or Hyde? The Many Faces of Phragmites

It’s easy to dislike Phragmites. The invasive brown reed can grow over 15 feet tall and tends to crowd out anything in its shadow. But in the story of global change, Phragmites is a gray character, like Mad Men’s Don Draper, or the enigmatic Professor Snape. Beneath the surface, Phragmites australis—a European reed sweeping over East Coast wetlands—can empower wetlands to grow higher soils and possibly survive rising seas. Biogeochemist Pat Megonigal of the Smithsonian Environmental Research Center (SERC) prefers an analogy from classic literature: Jekyll and Hyde.

“The Jekyll part is that Phragmites helps marshes maintain elevation and keep pace with sea level rise,” he said. “The Hyde part is that they are poor habitat for native plants and animals.”

The latest discovery in Megonigal’s lab could tip things in favor of Hyde. Phragmites’ deep-growing roots were once thought an advantage that helps wetlands build soil. But those same roots could be disturbing ancient soils deep underground—triggering them to release planet-warming carbon dioxide (CO2).

Soils are the third largest carbon pool on Earth. However, they release carbon dioxide when the carbon they hold decomposes. Surface soil carbon decomposes all the time as microbes feast on newly-deposited plant material. But carbon in deeper, older soils was supposed to be locked away, because deep soils were thought to contain tougher material microbes couldn’t decompose well.


“When you get into the deep stuff, that stuff is considered to be sequestered. Nobody can eat that,” said Blanca Bernal, former SERC postdoc and lead author of the new study in Global Change Biology. Except, she added, that’s turning out to not be true. “Several studies have shown that it’s actually not that recalcitrant. It’s just a matter of recreating the right conditions down in the soil for the microbes to start consuming that old carbon pool.”

For the first time, ecologists caught Phragmites in the act of releasing carbon from ancient soils.

They launched the study on the Global Change Research Wetland, a 170-acre experimental wetland in Maryland run by the Smithsonian Environmental Research Center. First, researchers grew Phragmites and native wetland plants in white PVC pipes partially submerged in a tidal creek. At the end of the growing season, they sealed the pipes and sampled the CO2 inside. Their goal: Uncover how much CO2 came from the plant, from microbes in the surface soil (40 centimeters or less) and microbes in the deep soil (40 to 80 centimeters).

In total, soil with Phragmites emitted just slightly more microbe-made CO2than soil with a native sedge, Schoenoplectus americanus. But location made all the difference.

Almost all the microbe CO2 from the soils with native plants—87 percent—came from the surface. Meanwhile, Phragmites triggered microbes in its soils to emit 80 percent of their CO2 from deeper soils, where CO2 was supposed to be safely buried. Phragmites released five times more deep-soil carbon than the native plant or pipes with no plants at all.

No great surprise, since the release of CO2 requires oxygen to oxidize the organic matter, and very little oxygen penetrates to any depth in wetland soils without being used up.


Most plants don’t have roots deeper than 30 centimeters, or one foot, underground, says Tom Mozdzer, a Bryn Mawr assistant professor of biology who also worked on the study. That’s a problem with plants like Phragmites that can go far deeper.

“We’ve been underestimating the potential influence of Phragmites, because we haven’t looked at what’s happening below that typical rooting depth,” Mozdzer said. The figures in the new study might still have underestimated how much carbon Phragmites can release, the scientists noted, because the Phragmites plants in this study weren’t fully mature.

What makes Phragmites so powerful? Having roots that stretch deeper underground helps, but that alone wouldn’t be enough to release deep carbon. Their roots also pipe oxygen below ground, which can stimulate microbes to decompose more. Phragmites roots also transport other compounds microbes find easier to digest, spurring them to release even more CO2.


But Phragmites has power to save wetlands as well. Its roots, while releasing deep-soil carbon, can also build wetlands up when facing sea-level rise. This puzzle is forcing conservations to decide whether it’s better to preserve native plants Phragmites crowds out, or ensure a wetland’s survival, period.“What are we managing for?” Mozdzer asks.

“Is it ecosystem services, or plant community?”

“At least for now, the Phrag-invaded areas are gaining elevation faster than the native areas,” said Megonigal. “So that suggests that on balance, they’re more Jekyll than Hyde.”

Another complication is that Phragmites in Chesapeake Bay area has two populations, the smaller, original native morph, and the  Eurasian immigrant, which is larger, more vigorous, and which his largely pushed the native variety out of it's original range, as well as claiming expanded range of it's own. So, should that function exist?
Posted by Fritz at 5:58 PM