Trees of course. This article on the choice that I found in the Chesapeake Bay news feed exemplifies the usual arguments. Artificial or real Christmas tree? The debate over which is more 'green' continues

As Christmas approaches, the Scrooge-like debate is back: Am I harming the environment by buying a real, freshly cut Christmas tree?

Or is it “greener” to go for an artificial tree and reuse it year after year?

With more than 1 million Christmas trees cut each year in Pennsylvania alone, it’s a legitimate question.

One thing I found perusing my "Christmas" file, is that it can be damn tough to tell a live tree from some fakes in a photo. And, who's looking at the tree anyway?


The answer is a little complicated.

There are pros and cons with each choice.

Live tree advocates are quick to point out that seedlings take a cut tree’s place. Christmas trees are grown on tree farms and are not part of forests.

Sure, but most cut trees end up being burned or composted, which rather rapidly uses up the oxygen they created, released as CO2 and  puts the pollutants back to the environment, for no net improvement.


Though it may not be an environmental consideration, buying trees cut locally supports local economies.

Pennsylvania Department of Agriculture estimates that the state has 1,360 Christmas tree farms, second only to Oregon, on 31,000 acres — fourth-highest in the United States. Lancaster County has close to a dozen such farms. Supporters point out Christmas trees are a renewable resource.

Christmas trees may only be used for several weeks to decorate the home, then discarded. But many local communities now gather them to be composted with the compost given free to residents to boost the growth of trees and plants.

You can also throw them into the local lake, where they serve as a habitat for fish, and an excellent place to lose tackle. You should check to see if it's legal, first, though.


A knock against live Christmas trees is that some are grown with the use of pesticides.

Store-bought artificial trees do eliminate the need for cutting a live tree. And there’s no production of carbon dioxides from driving to and from a tree farm each year to cut a tree. But at what price?

The manufacture of artificial trees involves the use of a host of petroleum-based chemicals, some of which are toxic.

Since most artificial trees are made in Asian countries, you need to factor in the energy used to transport the goods to the United States, though a 2012 study found long-distance transport very efficient.

No, I don't need to "factor in the energy used to transport the goods to the United States." I can make my decision based on any criterion I want


Eventually, the artificial trees are sent to landfills. Or, in the case of Lancaster County, to a trash-to-energy incinerator.

“If a household uses an artificial tree for at least 4 years, its carbon footprint (with regard to Christmas trees) will be smaller than that of a household that purchases a real tree every year,” according to the American Christmas Tree Association that represents those involved in the artificial Christmas tree industry.

You might get tired of the same cheesy fake tree every year but four years? That doesn't seem so bad. But of course, the tree grower have another take:


However, a Canadian study concluded that you have to use an artificial tree for at least 20 years to make it the greener choice. But, other studies say that most people keep their tree only five to seven years before replacing it with another.

Who knew that Christmas shopping could be so complicated?

This year, Georgia decided to dress our 30 year old Cycad up with some LED lights, and a few snowflakes and call it our Christmas tree. Well, it is Christmas, and it's a tree (or could be): 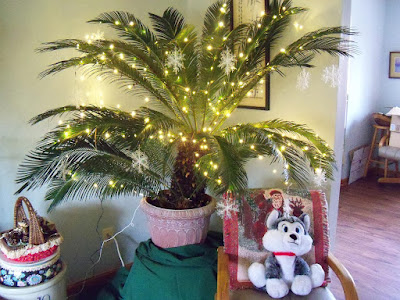 Wombt-socho has "Rule 5 Sunday: Maid of Meat" up and running at The Other McCain.
Posted by Fritz at 6:00 AM