Previous fish studies have shown the antagonistic relationship among predators and their prey inspires the evolution of larger brains. More recently, scientists from Sweden and Australia wanted to find out if the hostile nature of female-male relationship might yield similar results. 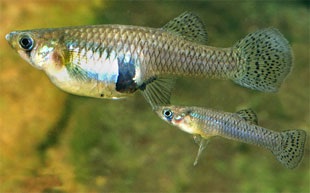 I strongly disagree with the binary notion that sex among fish is either consensual or nonconsensual. Fish have instincts, and not much more. They are not thinking in terms of consent or not. The female is likely being pursued by multiple males, and her initial avoidance is a mechanism by which nature picks the better (on average) male to mate her.  Look above, and you will see that the female Mosquitofish outweighs the male by about 3:1, and the male has that awkward gonopodium that he has to swing into position to mate with. It doesn't happen at high speed in a pursuit, it happens at the end when a female chooses (for lack of a better word) which male to mate with.


In the lab, scientists bred one lineage of male fish for the trait of enlarged genitals. Another lineage was bred for small genitals. A third lineage was used as a control. Researchers released the different groups into tanks of female fish and allowed the populations to procreate.

After nine generations of evolution, researchers measured the brain sizes of female fish. The brains of females subjected to males with longer gonopodia were 6 percent heavier than the brains of the other two groups.

I'm really getting tired of the SJWs in science and the media turning everything into an issue of sexism and rape. If the animal kingdom were to operate by the standard SJW rules of engagement (explicit verbal consent at every step), there wouldn't be enough critters around to fill Noah's Ark (leaving aside the problem of attaining verbal consent in nonverbal animals. If they only understood, they'd all be laughing at us.