Why the Founding Fathers Chose a Republic over a Democracy

I’m sorry about Boaty McBoatface! Man who came up with name for a new polar research ship apologises - but panel say they could ignore the public vote anyway

The man who came up with the name 'Boaty McBoatface' for a new £200m polar research ship has apologised for his wacky suggestion.

The eccentric moniker emerged as a favourite after Britain's Natural Environment Research Council (NERC) sought input in naming the new vessel, which will be a flagship of its scientific fleet.

The public were urged to find an 'inspirational name' that reflects the ship's mission, studying ice sheets, and celebrates Britain's long naval history.

Former BBC radio presenter James Hand said that while he stands by Boaty McBoatface as a 'brilliant name' for a ship, he has actually voted for RRS David Attenborough to be the new name. 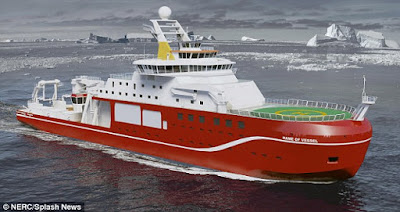 Boaty McBoatface is currently leading with 28,590 votes. The second-favourite - the RRS Henry Worsley, named after the explorer who died trying to make the first unassisted solo crossing of the Antarctic in January - has just over three thousand votes.

Stupid Lobsterbacks. I hope they had a whole lot of  votes from illegal aliens.


The NERC's terms and conditions state the final decision on the new name will be taken by its chief executive.

I have served as a scientist on a wide variety of research vessels in my time; the R/V Catalyst, the Yaquina, the Wecoma, the Cayuse, the Knorr, and even captained the Leidy, I've never thought the name of a ship (not a boat) should be left to the public. Heck, they'll vote for stupid stuff every time.
Posted by Fritz at 7:49 AM