An Latin American singer has claimed that her life is finally back on track after she turned her back on medication and hired a faith healer to exorcise demons.

Sabrina Sabrok, who currently lives in Mexico, said her life was falling apart earlier this year when she had checked in to a clinic in the capital to be treated for depression and panic attacks.

Just getting up to stand up and walk around must have been depressing, let alone getting up on stage.


But the 38-year-old felt the medication she was put on while being treated in Mexico City were not really helping, and in desperation she turned to faith healer Zulema.

The Argentine blonde, who has appeared on several television shows including the Mexican version of Celebrity Big Brother, said Zulema had told her that she was 'possessed'.

She could fit a couple of demons in there with room to spare for a household's worth of imps. Real or Fake?


So Sabrina hired the healer and her helpers to help her, and then carried out a dramatic exorcism in a local cemetery, which was captured on film.

The video shows her screaming, swearing and shouting, with many people suggesting the exorcism looked more like a low budget horror movie.

But Sabrina, who has also hosted her own television show on TeleHit, said she doesn't care what her critics think as the faith healer had helped her get her life back on track. 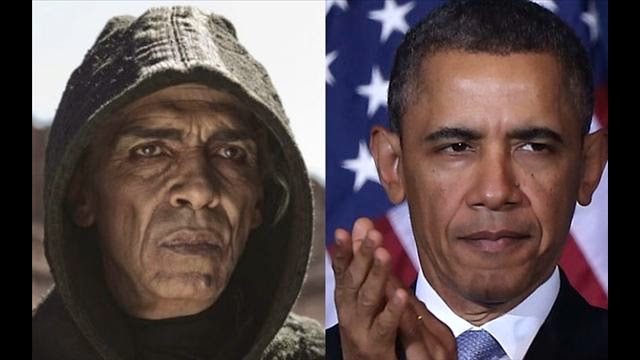 The faith healer, Zulema bears a certain resemblance to the Mohamen Mehdi Ouzaani, the actor who played Satan in the miniseries "The Bible" and who was said to bear a strong resemblance to Barak Obama. In fact, his scene in the movie "The Son of God," was was left on the cutting room floor in the resulting outcry.  Probably just a coincidence.

I sincerely hope it cures her depression and keeps her off drugs. Whatever it takes. But I rather suspect it's a promotional gimmick. If so, it worked.

Wombat-socho's monster compendium "Rule 5 Sunday: Winter Solstice Edition" is ready at The Other McCain.
Posted by Fritz at 6:00 AM