An environmentalist who has been prominent in the opposition to the plan to convert a Calvert County gas plant into an export facility has Lyme disease. Mike Tidwell, the founder and president of the Chesapeake Climate Action Network (CCAN), made the announcement Dec. 11 in a letter to supporters.

Tidwell, a Takoma Park resident, stated he began to experience symptoms of the disease last spring. He was diagnosed with Lyme disease in October.

Tidwell and his organization have participated in protests against Dominion’s plan to build a $3.8 billion liquefaction facility at Cove Point Liquefied Natural Gas (LNG) Plant in Lusby. The project has begun after a lengthy permitting process, which included public hearings held by the Maryland Public Service Commission and the Federal Energy Regulatory Commission (FERC). It was the latter agency that granted final approval for the plan this past September. 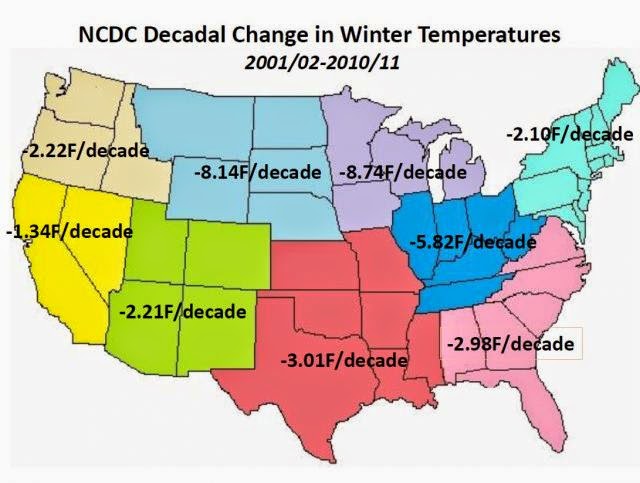 Which is amusing because the actual climate in the region, the southern mid-Atlantic has actually been cooling at a rate of circa 2-3 F per decade for the last 10 years or so (see right).  So if he wants to blame his Lyme disease on the cooling climate, he's welcome to make that argument, if he would like. You see, global warming isn't necessarily the same as regional warming.

Of course, what has really led to the apparent rise of the Lyme disease is the numbers of one of its important host species, the White-tailed Deer, host of the Deer or Black Legged Tick which often carries Lyme disease. In the absence of controlling predators, and with plenty of suburban plantings to eat, these deer have become ubiquitous residents in close proximity to humans. We have them tramp through our yard frequently at night, and often see them.  At the turn of the 20th century, White-tailed deer had almost been eliminated from the eastern United States, only a determined plan to protect them has brought their populations back to the point that they have become a bit of problem species.

While I wouldn't wish Lyme disease on anyone, I also wish Tidwell wouldn't attempt to use it in such a bogus attempt to bolster his climate victim credentials.
Posted by Fritz at 3:21 PM