A Jigger of Obamacare Schadenfreude


The White House has been quick to brag about the last of front-end problems in the ObamaCare exchange this year, but what about the back end? Last year’s debacle on the consumer side eclipsed the problems of managing enrollments with the insurers themselves, which created all sorts of issues when consumers tried to use insurance in which they thought they had enrolled, and for insurers who had trouble getting premium payments for the coverage they thought they had offered. This year, the process looks little changed, and insurers are now extending the deadlines because the Healthcare.gov back end is still not running properly:


Trying to head off a new round of consumer headaches with President Barack Obama’s health care law, the insurance industry said Tuesday it will give customers more time to pay their premiums for January.
America’s Health Insurance Plans, the main industry trade group, says the voluntary steps include a commitment to promptly refund any overpayments by consumers who switched plans and may have gotten double-billed by mistake.
Though the HealthCare.gov website is working far better this year, the industry announcement highlights behind-the-scenes technical issues between the government and insurers that have proven difficult to resolve. Last year’s enrollment files were riddled with errors, and fixing those has been a painstaking process. As a result, renewing millions of current customers is not as easy as it might seem.

How many years will it take to get the back end right? If it's not the part that people interact with routinely, apparently a very long time.

Jonathan Gruber should've been Time's Person of the Year 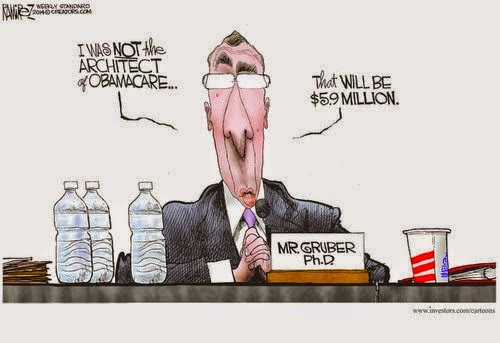 Jonathan Gruber should have been Time's Person of the Year. The magazine gave it to the "Ebola Fighters" instead. Good for them; they're doing God's work. Still, Gruber would have been better.
. . .
He represents the arrogance of the expert class writ large. They create systems, terms and rules that no normal person on the outside can possibly penetrate. They make life and living more complicated and then get rich and powerful off of their ability to navigate that complexity. Time and again they sell simplicity and security and deliver more complications and insecurity, which in turn creates demand for more experts promising simplicity and security the Gruberians never deliver.

Do you think Dr. Jon will miss his 15 minutes days of fame?

Blacks falling behind under ObamaCare


African-Americans are less likely to see benefits under ObamaCare compared to other racial groups, according to research released Tuesday.
While Hispanics, American Indians and Alaska natives have seen “dramatic” increases in healthcare coverage over the last year, obtaining coverage has been tougher for black Americans, largely because they disproportionately live in states that have not expanded Medicaid, according to an extensive 65-page report by The Urban Institute, a nonprofit research group.

Clearly, they should move to bluer states.

More than 1 million people picked a plan from Dec. 6 through Dec. 12, bringing the total to nearly 2.5 million, said Health and Human Services officials.

"It's been a strong start," said Andy Slavitt, overseeing the second year rollout. "Our call center and our technology have done their jobs -- so far."

Tuesday's numbers were partial, really just a subtotal. They reflected the 37 states served by HealthCare.gov. Enrollment for states running their own websites will be reported later. And Tuesday's numbers also did not include totals from the weekend and Monday, which saw strong consumer interest.

The administration has set an overall goal of 9.1 million people signed up for 2015. That includes new customers plus roughly 6.7 million current customers, most of whom will be renewed automatically.

Should we try to count the horses teeth? Still a long way from covering the 30 million or so uninsured.
Posted by Fritz at 5:14 PM