In the recent internet age, Wunderkind Ezra Klein started as a blogger back in 2003 and worked his way through various liberal media positions (Howard Dean campaign, MSNBC analyst, American Prospect), eventually (2009) landing a sort of stable gig at the Washington Post, where he was the editor of "Wonkblog":

Every morning, I wake up to a half-dozen stories that are clearly important and that any policy site should be trying to follow in some detail. Stories about the troubled implementation of the health-care and financial reform bills, stories about the wrangling over infrastructure spending and energy regulations, stories about the unusual power a bureaucrat or backbencher is exerting over an issue that affects us all. Stories that matter, but that I simply didn’t have the bandwidth to cover.

In other words, a place where liberals could go to get their prejudices confirmed with a smattering of cherry picked data and enough talking points to recite back to other liberals to sound knowledgeable.

Alas, in late 2013, Jeff Bezos, the wunderkind of Amazon bought the Washington Post with pocket change. Sensing an opportunity with a fellow denizen of the dot.com boomlet, Klein made him an offer requiring a much larger role in the paper, and Bezos responded, apparently, with a firm, "hell no"! Shortly thereafter, Klein announced his departure to Vox Media form the new startup site Vox:


In January 2014, Vox announced it had hired Ezra Klein, who formerly served as the editor of the Washington Post's WonkBlog, to be the founder of a new website covering news and politics, codenamed "Project X" and later adopting the simple name Vox. Klein explained in an announcement on The Verge that he felt that current news websites did not provide enough context to the stories they cover, and that he aimed to create a news website that would be "as good at explaining the world as it is at reporting on it". Project X officially launched as Vox on April 6, 2014; its goal is to cover stories dynamically without succumbing to the "incremental" coverage used by traditional outlets, and to "[deliver] crucial context alongside new information" through "cards" that can be accessed through highlighted words within articles.

It's been almost a year; how it going?  Not so well, if you look at this report from the Washington Free Beacon:  The Year in #VoxFails 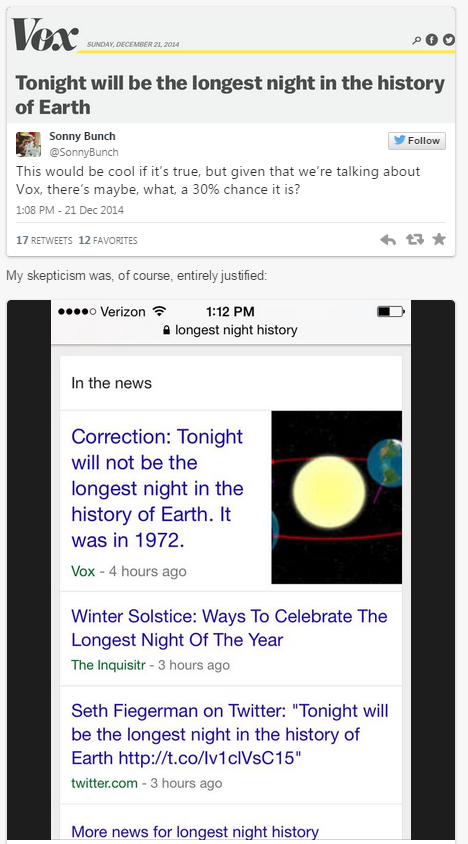 What went wrong? Well, we know the earth's rotation is slowing down, very slowly, due to, among other things, tidal resistance, thus all other things being equal each year the night of the winter solstice ought to be a very tiny bit longer than the last. Alas, all things are not equal, and there's a bit of variance.


One of their writers boldly claimed that David Chase had, finally, confirmed that, yes, Tony died at the end of The Sopranos.

Except, oops, Vox’s writer had more or less totally made it up.

Then there is their expert explaining of the Middle East, where it was voxplained to us that the dastardly Israelis were considering shutting down an actual bridge connecting the Gaza Strip and the West Bank in order to mess with the Palestinians.

Except, oops, no such bridge exists, as anyone who knows anything about the geography of that area could have told you.

I was shocked to discover from Vox that protesters in Hong Kong had adopted the “hands up, don’t shoot!” mantra from protesters in Ferguson, Mo. What a fantastic example of the power of social media and the smallness of our interconnected world. We truly live in an age of wonders!

Except, oops, there’s literally no proof whatsoever that the Hong Kong protesters had done any such thing.

Not knowing much about the rap musics, I was more or less the target audience for an explainer on Iggy Azalea, whom Vox claimed had decreed herself the “queen of rap.” Please, enlighten me! Tell me about this talentless white person who is, gasp, appropriating all the culture. I need to know!

Except, oops, it wasn’t Iggy Azalea who had declared herself the queen of rap but a fan account that has literally no ties to Iggy Azalea.

Having never been to Boulder, Colo., I was pretty impressed by the fact that the city had such a bladder control problem. More than a hundred toilets per resident? WOW!

As someone who spends a lot of time thinking about copyright and intellectual property, I was terribly intrigued by the notion that the government can’t claim a copyright on its coins. Seems like that could lead to some problems, no?

Except, oops, “This article was totally wrong.”

I could go on, but hopefully you get the point: never ever ever ever trust any single solitary thing that you read at VOX DOT COM. EVER. There’s roughly a 100 percent chance that they have gotten the story either partly or wholly wrong.

A pretty amazing list for one year for a website dedicated to bringing the fact to the public.
Posted by Fritz at 12:07 PM