Back in July, we saw how the Bay was apparently doing better (in terms of low dissolved oxygen) than had been expected, but that it might be due to sampling problems. Good news. The trend has continued into August, near the end of the season of concern: 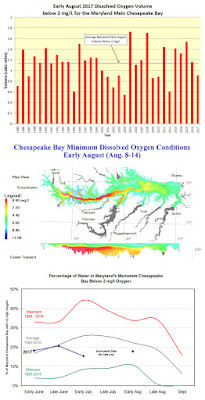 Dissolved oxygen conditions in Maryland’s portion of the Chesapeake Bay mainstem were much better than average for early August, reports the Maryland Department of Natural Resources.

The hypoxic water volume (areas with less than 2 mg/l oxygen) was 0.91 cubic miles, which is much smaller than the early August 1985-2016 average of 1.31 cubic miles. No anoxic zones (areas with less than 0.2 mg/l oxygen) were detected.
. . .
The better-than-average conditions follow similar results from early July. While hypoxic volume estimation was not available for late July, conditions could be more favorable due, in part, to lower than average temperatures in the week leading up to sampling. Higher temperatures generally cause more stratification of the water column, which inhibits oxygen from mixing into deeper waters. Waters with higher temperatures also hold less oxygen.

In the beginning of June, the National Oceanic and Atmospheric Administration, U.S. Geological Survey, University of Maryland Center for Environmental Science and University of Michigan scientists predicted a slightly larger than average hypoxic volume for the bay due to higher spring flows (January-May) and nitrogen loading from the Susquehanna River.

Looking at the third figure, it appears we had an average hypoxia year when they were expecting a worse than average year. That's progress, of sorts.
Posted by Fritz at 4:53 PM