Last night around 11 PM a "slightly less hot" front rolled through with a thunderstorm and deposited 1.2 inches of rain in about a half hour. As a result, today was slightly less hot enough to consider walking Skye down to beach before lunch.  This female Eastern Tiger Swallowtail was sipping nectar at some Loosestrife at the marina. 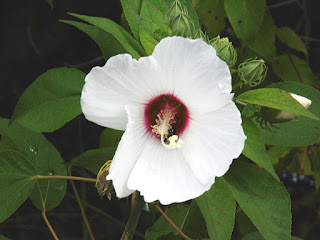 A Swamp (not marsh) Rose Mallow, a member of the hibiscus family with a large hibiscus-like flowers. Common in wetlands in our region (mostly marshes, I would add), their blossoms are as large as 10 inches across. However:


The saga actually begins over in Europe where the inhabitants would collect a certain plant from marshy areas. The roots of the plant could be boiled to produce a white sticky substance. Even though it was discovered to have no medical properties, it still satisfied the sweet tooth of children. - "Would a Mallow by Any Other Name Taste So Sweet?" 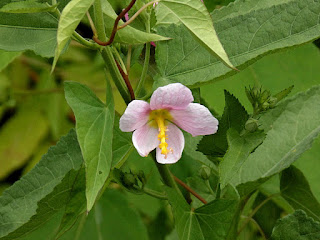 The very similar Seashore Mallow, much smaller, but found in similar habitat. Both of these were growing along the edge of the marina, just above the usual high tide mark.

We must have been a bit early for the main crowd at the beach. 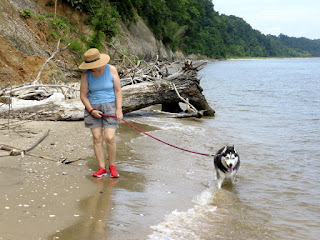 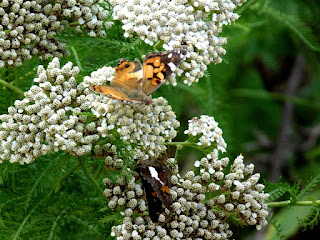 An American Lady and a Silver-Spotted Skipper share a wild Yarrow bloom on the cliffs. 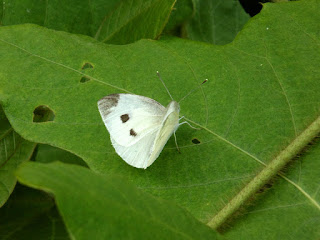 And a Cabbage White rests on the Kudzu. 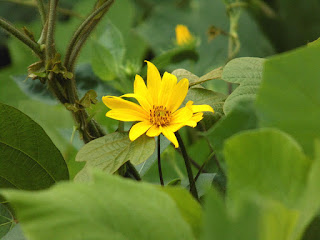 Some kind of composit flower peeking out of the Kudzu. Someday I may figure out what it is.
Posted by Fritz at 2:31 PM