The Storm Stayed Away at the Beach 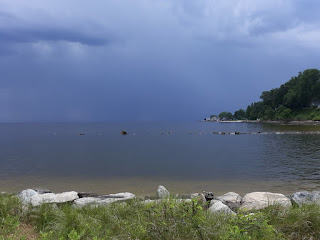 Georgia had to stay home today. I waited out a shower, checked the radar, and decided the oncoming storms would track south of us. When I got to the beach, the southern sky was dark and gloomy . . . 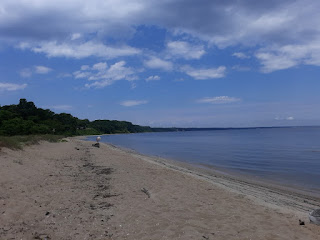 While the northern sky was mostly sunny. It stayed that way the whole walk, with the storms sliding along south of us. 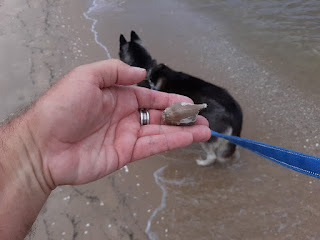 I found another one of those "different" fossil shells again today, up in the big new slide. The experts on the Facebook fossil board have identified them as "volutes", and say they are rare in our formations.


Volutes are distinguished by their distinctively marked spiral shells (to which the family name refers, voluta meaning "scroll" in Latin).

The shells have an elongated aperture in their first whorl and an inner lip characterised by a number of deep plaits. The elaborate decorations of the shells has made them a popular collectors' item, with the imperial volute (Voluta imperialis) of the Philippines being particularly prized.