It's funny how liberals have seen a sudden new respect for John Bolton. Well, except maybe  Chris Hayes who blasts John Bolton over book: He's 'attempting to literally cash in on betrayal of his country'. Even a broken clock . . .


First, let me say that I love this book. I love everything about it. It is true unadulterated fan-fic for Bolton lovers everywhere. He is always right. He is always noble. His purposes are always true. Anyone who disagrees with him is an idiot, or possibly worse. Edward from Twilight has more flaws than this iteration of John Bolton, the mustachioed hero who can do no wrong… except to be, at a critical moment, surrounded entirely by idiots.

I confess I didn't realize how dumb John Bolton was until I read his ABC interview transcript this morning. He's like Gary Larson's horse veterinarian who only has one treatment: "shoot horse." And apparently he thinks that's a "strategy" that Trump lacks.
— Scott Adams (@ScottAdamsSays) June 22, 2020

At WaEx, Schumer demands inspector general investigation into 'corrupt firing' of US attorney, and some wishcasting by the NYT (cited at Hot Air) For Barr, Standoff With Berman Adds To String Of Miscues, but from WSJ Attorney General Barr, Berman at Odds Over Letter Criticizing New York City Mayor  (also cited at Hot Air),   Geoffrey Berman Is No Political Martyr


The Washington Resistance to Mr. Trump is portraying this as an attempt to protect his political allies. Mr. Berman has prosecuted Mr. Trump’s former associates, including attorney Michael Cohen, and the hush-money payments to Stormy Daniels. He’s also said to be investigating Deutsche Bank’s business dealings with the Trump Organization before Mr. Trump was President.

But our Justice sources say Mr. Berman’s active investigations don’t involve Mr. Trump’s allies, except a minor one related to Trump adviser Rudy Giuliani. Replacing Mr. Berman with Mr. Clayton or anyone else won’t make investigations go away. The minute anyone moved to shut one of them down, the news would leak and career prosecutors would resign. Mr. Barr’s Saturday letter to Mr. Berman said he tasked Justice Inspector General Michael Horowitz with examining any “improper interference” with current investigations. If this is a coverup, it’s the most inept in history.

The shame is that all of this wastes more of Mr. Barr’s political capital. The AG is trying to clean up the Justice Department after its 2016 campaign abuses, and U.S. Attorney John Durham is investigating what happened and why. But the media and the FBI and Justice officials who spied on Trump campaign officials, promoted the false Steele dossier, and lied to the FISA court are desperate to tarnish Mr. Barr before Mr. Durham reports. That’s what’s really behind all the outrage over what should be a routine replacement of a U.S. Attorney.

Chuck Ross at Da Caller has a list and ANALYSIS of 8 Russiagate Investigators You May Not Have Heard Of. Some lesser known figures, though most have been seen in these pages before.


There is increased speculation, based on a pattern in other international activities and U.S. participants, the Iranian deal included return payments to U.S. officials for the release of billions in funds and the loosening of sanctions. It is possible the return payments to the Obama team held a timing mechanism and the payments were stopped after President Trump withdrew from the deal and re-instituted sanctions. Thus the severity of opposition from western politicians who were scheduled to remain wealthy via Iran.


Real Clear Politics provides a transcription of the interplay between the attorney general and host Maria Bartiromo, who told Barr:


“A source said to me a couple of years ago, speaking of the Russia collusion story, that this was the closest the United States ever came to a coup to take down a president since the assassination of Lincoln. Is that an appropriate statement?” Bartiromo asked Barr.
“In this sense, I think it is the closest we have come to an organized effort to push a president out of office,” Barr agreed. “I’m not reaching a judgment to what the motivations there were.”

He said that the motivations may have been different for each of the players in the scandal.

But there was more. Barr’s exasperation with an incurious media and their lack of concern over the Russiagate’s toll on civil liberties was “stunning” to him.


It’s been stunning that what we’ve gotten from the mainstream media is sort bovine silence in the face of the complete collapse of the so called Russiagate scandal, which they did all they could to sensationalize and drive. And it’s like not even a ‘whoops’ and they are on the next false scandal. So that has been surprising to me that people are not concerned about civil liberties and our governmental process.

That assumes the media are interested in facts, for which there is no evidence. Margot Cleveland at Da Fed has a look at What’s Inside Grassley’s Letter Demanding More About Deep State Role In Spygate, featuring a deep dive into the misdeeds of Stefan Halper and his handlers. And sundance presents Lou Dobbs Interviews Devin Nunes – USAO John Durham Needs to Come Forth Soon With His Findings…

via Wombat's In The Mailbox: 06.22.20, This Ain’t Hell: Alexander Vindman Up For Colonel – Could President Trump Nix His Promotion?


Lieutenant Colonel Alexander Vindman is up for Colonel this year. Democrats are worried that President Trump will step in and cause Vindman’s name to be removed from the promotion list. They’re trying to paint such action as “vindictiveness” and “politicizing the military”.

Democrats are worried about losing one of their insiders. 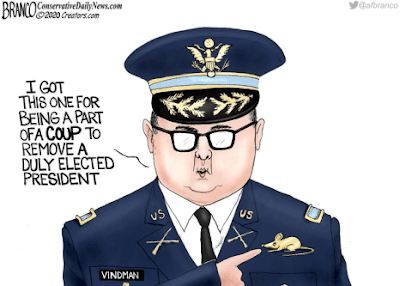 Linked at 357 Magnum in Wednesday Link Roundup.
Posted by Fritz at 9:51 AM