WaPoo, Flynn committed perjury, and DOJ request to toss his conviction was ‘corrupt,’ ‘politically motivated,’ court-appointed adviser argues,  AP, Ex-judge says push to dismiss Flynn case is abuse of power, which of course, is what you would expect him to claim.


Former U.S. District Judge John Gleeson said in a filing Wednesday that the government “has engaged in highly irregular conduct to benefit a political ally of the President.” He urged the judge handling the case to deny the motion and argued that Flynn had committed perjury.

Ace,  AP Headline: "Ex-judge says push to dismiss Flynn case is 'abuse of power'" Don't Worry: It's Fake News. AP Is Misleading You, As It Does Every Day.


Here's what AP's headline fails to mention, and which the article itself waits to tell you, and then downplays: The "ex-judge" in question is John Gleeson, the judge who wrote the Washington Post editorial demanding that Flynn be jailed, and the same person that Noted Low-IQ Charity Hire Emmet Sullivan appointed as his own personal prosecutor.

So it seems as if we already knew John Gleeson's unhinged, partisan opinion, right? This isn't new news. This isn't some independent judge asked by the circuit court to make some initial findings.

This is the Personal Prosecutor that Sullivan has sought to hire to prosecute Flynn, using taxpayer funds for the purpose of private vengeance.


Gleeson, also a Clinton appointee who retired from the bench in 2016, said Wednesday that Sullivan should not grant the Justice Department’s request for a dismissal, arguing that “the Government’s statement of reasons for seeking dismissal is pretextual” and “the Government’s ostensible grounds for seeking dismissal are conclusively disproven by its own briefs filed earlier in this very proceeding.” He also claimed that the agency’s move to dismiss the case was “riddled with inexplicable and elementary errors of law and fact” and “leave of court should not be granted when the explanations the Government puts forth are not credible as the real reasons for its dismissal of a criminal charge.”

Sidney Powell, a former federal prosecutor who took over as Flynn’s lead defense attorney last summer, previously told the Washington Examiner that Sullivan’s decision to appoint an outsider like this was “bizarre and unconstitutional.” She argued that “this travesty of justice has already consumed three or more years of an innocent man’s life” and that "no further delay should be tolerated.”


Go figure that the special master hand-picked by Judge Emmet Sullivan sees the Michael Flynn case the same way. In a filing at the deadline before a hearing at the DC Circuit Court of Appeal, retired federal judge John Gleeson argues that a motion to dismiss charges against Flynn amounts to a “gross abuse” of power to favor a political crony of President Donald Trump. Not only does Sullivan have the authority to reject the dismissal motion, Gleeson argues, Sullivan has an explicit duty to punish Flynn — at least for lying to the court in his plea:
. . .
Well, sure, that’s one way to look at a dismissal motion where the Department of Justice, er … [checks notes] … cops to misconduct by its prosecutors and by the FBI. Isn’t that a “gross abuse” of power, too, one that calls for specific remedies and sanctions? That would make the perjury charge one hell of a way to punish the government. What’s next — giving a defendant the electric chair after a Miranda violation?

Andrea Widberg at AmThink, From the First Page, Judge Gleeson’s Brief Against Flynn is a Travesty


It’s typical for dishonest attorneys to use fake citations – cases that do not stand for the principles asserted -- in their endless string sites, hoping no one will check. This what Judge Gleeson did in his brief: Every one of his 14 citations in footnote two on page 1 is a lie. That’s all you need to know about his brief.

So Clinton paid for a dossier handed off to DOJ to target Trump and now Biden's donors hand off to a federal judge a brief targeting Trump!! https://t.co/Xk8bGw721n
— Margot Cleveland (@ProfMJCleveland) June 10, 2020

Make no mistake: This is all Judge Sullivan ever wanted... pic.twitter.com/nvA0cWPhwg
— Margot Cleveland (@ProfMJCleveland) June 10, 2020


John Gleeson is essentially filling an assignment by the judge to assume the role of prosecutor and inform the court through an amicus briefing. That brief was filed today [pdf available here and below]. Within the brief, and counter to the position of the DOJ with new information, Gleeson claims the predicate for the investigation of Flynn was valid and sets out to launch his argument from that foundation.

Assuming the role of “Spygate” defender is an interesting effort by John Gleeson; considering that Gleeson should have little knowledge about new discoveries into the DOJ and FBI predication activity in 2016. The discoveries by USAO John Durham (Spygate in total) and USAO Jeff Jensen (Flynn case specific) should be unknown to Gleeson as he attempts to frame his argument.

When you read the brief, it does make you wonder if Gleeson might be attempting to frame the current Flynn argument from the perspective of justifying the total Spygate operation. This approach would be of benefit to the corrupt DOJ and FBI small group who are viewed to have purposefully weaponized their agencies for political intents. From that perspective Gleeson (Lawfare) would be using his Amicus role to build the small group defense.

By taking this approach Gleeson opens himself up to the collapse of his position, right out of the gate, if the valid predicate he is assuming does not exist. Of course this assumes the DOJ might be willing to highlight the specifics on why the Gleeson predicate is invalid, in the counter to his Amicus brief.

Margot Cleveland at Da Fed, New Russiagate Subpoenas Probe Depths Of Obama Administration Corruption In Flynn Ambush. I can't find a quote to characterize it. Read it and weep.

I&I, Will Obamagate End With Prosecutions? It Should. Yep. Fox, Barr says familiar names among those DOJ is investigating in Durham probe, calls findings 'very troubling'. "Adam Mill" at AmGreat, Familiar Names That May Appear in Durham Indictments but wonders  "is he really willing to weather the media firestorm that will rise up to defend the politicized criminal system that has become the status quo?"

At Da Caller, Chuck Ross reports Primary Steele Dossier Source Remains Elusive Six Months After Scathing Watchdog Report. Chris Wray is not being forthcoming. He may have good reasons, but he may just be protecting FBI "resistance" members.

Via Wombat's In The Mailbox: 06.10.20, American Greatness: FBI Bends The Knee To The Mob "Until now, the FBI at least would have made a half-hearted effort to deny its conversion into a leftist political asset. No more." 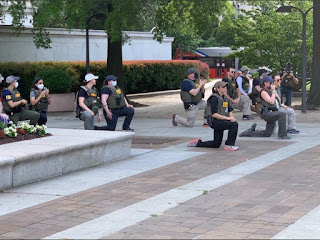 The FBI, particularly in D.C., has proven itself an invaluable instrument of left wing-inspired persecution for some time. It uses ambiguous laws like FARA and the Logan Act to entrap political enemies. It illegally spies on thousands of Americans. It allowed itself to be used in a smear operation paid for by the Democratic National Committee to interfere in a domestic American election.

Until now, the FBI at least would have made a half-hearted effort to deny its conversion into a leftist political asset. No more. The most powerful law enforcement agency in the United States has literally kneeled to its master in a public display of loyalty. The FBI is so heavily armed and lethal, that it could almost be a branch of the military. It maintains a tactical arsenal that could easily overwhelm the puny Secret Service ceremonially guarding the president. What could a mob of neo-Maoists do with an army of heavily armed FBI agents? The possibilities are endless.

If the FBI is to be an anti-constitutional force in the hands of a mob, then it presents itself as a grave threat to our freedoms and democracy. We’ve known since reading the Strzok/Page text messages almost three years ago that FBI leadership maintains a climate tolerant of politicized law enforcement. “Viva la resistance!” wrote one FBI lawyer days after the election went the “wrong” way. He would later forge evidence to fool a court into renewing a search warrant to continue spying for the resistance. It would have been a crime except that it was done to undermine the current president. So the FBI protected his job and anonymity for years before he was allowed to quietly resign when the heat became unbearable.

Even under its previous director, James Comey, agents never would have bent the knee in public to leftist mobs. They would have understood that the FBI must maintain at least the appearance of political neutrality. But Christopher Wray seems to have taken the revolution to the next level. Apparently he thinks nobody can stop the FBI as it metamorphosizes into a kind of American Red Guard. So he’s allowing units within the FBI to pledge their guns to the cause.