Lesseee, what do we have? From John Sexton at Hot Air, Sweden Launches Inquiry Into Handling Of Pandemic As Death Rate Becomes Highest In The World. So maybe doing nothing wasn't the optimal solution? 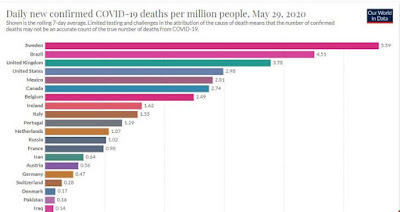 But then, maybe it's not the worst either.


To be clear, the death rate being discussed here is new daily deaths. While Sweden now has the most daily deaths per million, that wasn’t always the case. In this version of the graph, you can see that the UK, France and Italy have all had much higher daily totals at the peak, before dropping. Meanwhile Sweden’s average (the red line) has remained relatively high since April. 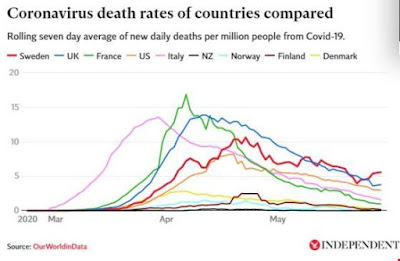 
The medical journal Lancet has now fully retracted their prior claimed “scientific study” against the use of Hodroxychloroquine. The Lancet study was quickly and purposefully used by all major media outlets to attack President Trump for his advocacy of the drug as an effective treatment for the COVID-19 virus.

It now appears the purpose of the fraudulent “scientific study”, conducted by a sketchy outfit called Surgisphere – who mysteriously appeared only after President Trump advocated for the treatment, was to weaponize medicine for political purposes.

After they were exposed for their role in pushing manipulated data, Lancet has now fully retracted their study in an attempt to retain credibility.


LANCET – Today, three of the authors of the paper, “Hydroxychloroquine or chloroquine with or without a macrolide for treatment of COVID-19: a multinational registry analysis”, have retracted their study.
They were unable to complete an independent audit of the data underpinning their analysis. As a result, they have concluded that they “can no longer vouch for the veracity of the primary data sources.” (continue reading)

Don’t expect the media to announce the Lancet retraction, or apologize for their role in pushing the political narrative around it. Journalism is dead as the entire profession has now been exposed as nothing more than narrative engineers.

This isn't the Lancet's first foray into political science; I recall a study they published back in the Iraq War era that claimed far higher civilian deaths than anyone thought possible. The error bars overlapped zero.

I am a hydroxyqchlorquine agnostic; I neither believe or disbelieve. I do think the crisis will be over before we know for sure.

Old but interesting, from Town Hall,  Israeli Professor Shows Virus Follows Fixed Pattern. I'd be more convinced if he proposed a mechanism instead of waving his arms and pointing at graphs.

And in great moments of political hypocrisy, who can beat Michigan Gov. Whitmer? From Pirates Cove Governors Whitmer, Cooper March With Protesters: So, Lockdown Is Fully Over, Right?


Oh, look, it’s one of the most restrictive, abusive, dictatorial governors in the nation regarding Coronavirus

“I encourage everyone who is protesting, if you are out demonstrating or out congregating at all, please wear a mask and please try to stay six feet away from others,” she said on Mojo In The Morning.

She marched along as the closely packed large group chanted, “Hands up, don’t shoot,” and “This is what democracy looks like.”

Matt Margolis, PJ Media, Biden Blames Trump for 60K Deaths for Not Shutting Down Country Earlier, But He Held Rallies Through March 10, except Trump shouldn't have shut down those flights from Biden's patron, China.

George Floyd’s funeral is expected to have hundreds or thousands of attendees, including high profile politicians like Biden. Meanwhile people have not been allowed to go to their own family members funerals because attendance was capped due to COVID.
— Matt Walsh (@MattWalshBlog) June 4, 2020

And from the Babylon Bee, In Show Of Solidarity, COVID-19 Vows Not To Infect Anyone Protesting Inequality 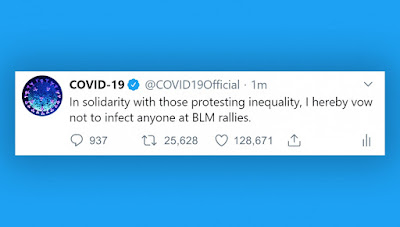