Or any leftist for that matter. I made a career as an environmental scientist, largely hiding my conservative views except to a few trusted friends. I knew of a few others. But this WuFlu thing really emphasizes why you never trust a leftist scientist if their science clashes with their political beliefs. Jonah Goldberg, who has largely become unreadable due a case of advance Trump Derangement Syndrome, drops it long enough to have some insight again in The Treason of Epidemiologists - They erode the public trust when they tell people to stay home from church but encourage protests for a cause with which they agree.


We spent the last couple of months being hectored by public health experts and earnestly righteous media personalities who insisted that easing lockdown policies was immoral, that refusing to social distance or wear masks was nigh upon murderous. They even suggested that protests were somehow profane. But now that the George Floyd protests are serving as some kind of Great Awokening, many of the same are saying “never mind” about all of that. Protests aren’t profane, they’re glorious and essential—if they agree with what you’re protesting about.

We should always evaluate the risks and benefits of efforts to control the virus. In this moment the public health risks of not protesting to demand an end to systemic racism greatly exceed the harms of the virus. https://t.co/s9DagyjQ1J
— Jennifer Nuzzo, DrPH (@JenniferNuzzo) June 2, 2020 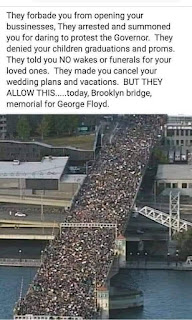 Now, I don’t begrudge anybody for believing that the fight against racism or police brutality is important. But this “argument” rests on some preposterous assumptions.

Frieden, the former head of the CDC, is very concerned about public trust. Me too. But you know what erodes public trust in people like Frieden? When they say that you’re a fool or monster who will get people killed for wanting to go to church or keep your business open but you’re a hero when you join a protest they approve of.

Second, the whole idea that these protests will solve “systemic racism” or police misconduct is a form of magical thinking. Let’s assume that there is legislation that can solve these problems that stem from human nature for all time. How many more days of protest are necessary to get them? If they go on for another week, will Trump be more likely to sign the legislation? How about another month? Will that do the trick? How long do they have to go on for, how much germ spreading for justice, has to occur before what the epidemiologists were saying becomes true again?

Frieden and these other medical experts know a lot more than I do about diseases, but they know less than a taste tester at a lead paint factory about the nature of politics if they think this is a chance for a moonshot cure to the problems of race in America.

The simple fact is that whatever legislation we’re going to get, we’d still get if the protests stopped this morning. In fact, a reasonable person would conclude we’d be more likely to get it if they stopped now, because the more these things go on, the more opposition and resentment will grow.

And you know what? Even if we get precisely the kind of reforms that Al Sharpton dreams of, he will still be talking about systemic racism the day after Donald Trump signs them into law (stop laughing). College professors who only know how to teach about systemic racism will still teach about systemic racism. None of the reporters on the racial justice beat will be reassigned to cover municipal water council hearings. The Southern Poverty Law Center won’t suddenly shut down or even switch to studying poverty. It will send out dunning letters saying, “This was a good first step, but so much more work needs to be done.”

You know how I know that? Because after 50 years of unparalleled improvement in racial issues, many of the same people say the problem is worse than ever and more people make a living from fighting racial injustice than ever before. If I thought for a moment that this would lead to “solving” whatever they mean by systemic racism, I’d be out there marching all day, too.

I'm slowly coming around to the cynical opinion that while the death of George Floyd was not a hoax, the whole "protest" movement resulting from it is. This is simply the next phase of the "the resistance" designed to tear down and tear apart the country before the election in the hope of damaging Trumps reelection chances. If George Floyd had never even been arrested, the same people would find another excuse to "protest" and the same result would happen, wide spread riots. Let Stacy McCain explain The Church of ‘Social Justice’


Amidst a week of rioting and looting, New York Times writers finally found a topic they were united on: outrage over an editorial by Arkansas Republican Senator Tom Cotton saying president Trump should invoke the Insurrection Act to use federal troops to stop the violence. Their asinine rationale was this exposed black staffers to “violence.” Well, only if they’re rioters. They were outraged that the house organ of the Democratic Media Complex has to pretend there are other opinions than their own, and that anyone would dare stand up to the sanctified violence of Social Justice.
“Social Justice” is more than an ideology, it’s an all-consuming civil religion for the unchurched. To oppose it is to be evil, full stop. Against evil, any weapon or action is automatically sanctified. . . .
The first goal of social justice is to force groupthink and obedience to the dictates of the victimhood identity politics left. To control the country, the hard left must first control the Democratic Party. The goal of controlling the Party is far more immediate and important to them than winning elections for “moderate” Democrats.

Because “social justice” is essentially religious in nature, any Democrat who does not genuflect before the altars of this cult must be cast out as a heretic, the “politics of personal destruction” serving the purpose of terrorizing others into mindless compliance. Facts and logic cannot be used to refute such a belief system, and anyone who raises questions of practical politics — will this kind of radical protest movement actually help elect Democrats? — will be condemned as a cowardly sellout, a potential traitor to the cause. Of course, it is heresy to doubt the righteousness of the cause in terms of public policy. That is to say, no one can be allowed to ask whether liberal policies actually make life better for black people or members of other groups identified by the Left as victims of collective oppression. And because “social justice” is a religion, it must always have its sacrificial martyrs like the heroic barista . . .

Linked at the Daley Gator in Leftism, an Ideology of Inconsistency.
Posted by Fritz at 9:08 AM