From Roger Simon at ET, No Holds Barred: Barr and Durham Must Investigate Obama & Biden Too He should, but he won't because he won't want to be seen as that political, although that ship has long gone over the horizon. From Dan Chaitin at WaEx, Barr: Trump powerless to dictate Durham investigation


Attorney General William Barr emphasized President Trump has no authority to tell him how to steer U.S. Attorney John Durham's inquiry into the Russia investigation.

"No," Barr said when asked Thursday by Steve Inskeep, host of NPR's Morning Edition, whether Trump has any dominion under the Constitution to dictate the outcome of the DOJ investigation into misconduct by federal law enforcement and intelligence officials.

Barr said the same in response to a question about whether the president can instruct him to release a report a certain way. "I think Durham is going to report the facts," he added.

All this came after Inskeep noted how Trump has expressed "very strong opinions" about Durham's work. The president has, for instance, asserted the Obama administration improperly spied on his campaign and claimed his predecessor committed "treason."

Democrats, law enforcement veterans, and others have raised concerns that Durham is conducting a politically motivated inquisition, even warning of an "October Surprise" to boost Trump in the November election.

"No one under investigation in the Durham matter is running for president. And I've said publicly that neither President Obama or Vice President Biden are under investigation," he said. "And I've also said I'm committed to having the American people have a free choice in this election between the candidates, and I don't want the Department of Justice to be interfering in that."

Chuck Ross at Da Caller recounts how the FBI Refuses To Disclose Records On Source Who Undermined Steele Dossier. My guess is Oleg Deripaska.


The FBI is refusing to release documents related to the primary source for dossier author Christopher Steele, saying in response to a public records request that the information is classified and risks identifying a confidential FBI source.

The source, whose identity remains a mystery, holds key information that could shed light on apparent inaccuracies in Steele’s dossier, which the FBI cited extensively in applications for surveillance orders against Trump campaign aide Carter Page.

But FBI Director Says He’s Terminated and Disciplined Those Involved with FISA Abuse (News Thud). Too little, too late. He's stalling hoping for a Biden administration.

Via the Wombat's In The Mailbox: 06.25.20 July Kelly reminds us of Obama and his Gang of Untouchables.


Despite a steady flow of evidence confirming that Obama’s White House directed the operation to infiltrate, spy on, and sabotage Trump’s presidential campaign and then employ those same forces against Trump after he won, the media refuses to report any of it. Notes released this week once again reveal that the targeting of Lt. General Michael Flynn, Trump’s incoming security advisor, was openly discussed during a high-level Oval Office meeting in early January 2017 with Obama, Biden, James Comey, Susan Rice, and Sally Yates. 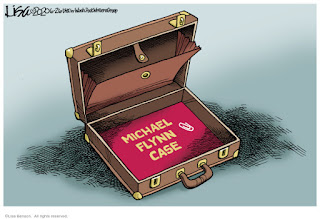 
A little more than a year ago, Lokhova, now a U.K. citizen, filed suit in a Virginia federal court against the Wall Street Journal, New York Times, Washington Post, NBC Universal, and Stefan Halper, for defamation and interference with contract. Lokhova’s complaint alleged that Halper, who served as a confidential human source during the Crossfire Hurricane investigation, “colluded with the media defendants and others to ‘leak false statements about [her] as part of a nefarious effort to smear General [Michael] Flynn and fuel and further the now debunked and dead narrative that the Trump campaign colluded with Russia.”

The complaint further alleged that “Halper intentionally misrepresented that Lokhova was a ‘Russian spy’ who ‘had an affair with General Flynn on the orders of Russian intelligence’ and ‘compromised General Flynn.’”

A chance meeting in February 2014 between Lokhova and Flynn—then President Barack Obama’s director of the Defense Intelligence Agency—at a dinner at Cambridge University where Lokhova was completing her Ph.D. in history provided the silver for the scandalous tale Halper allegedly crafted and then sold to the media outlets.

The story that Lokhova had an affair with Flynn began with inuendo when the U.K. Sunday Times ran an article suggesting impropriety between Flynn and an unnamed Cambridge student. Later reporting by U.S. outlets named Lokhova as the “Russian” and relied on an unnamed former senior U.S. official’s expression of concern about the meeting to provide a veneer of credibility to story.

Each story spun the tale further, while adding hyperlinks to the earlier reports. The earliest reports, however, came more than a year before Lokhova filed suit. That delay caused the district court to dismiss Lokhova’s complaint based, in part, on the one-year statute of limitations. The district court also found Lokhova’s complaint failed to adequately allege facts to show that Halper was the source of the defamatory statements given the various media outlets. Accordingly, the court threw out Lokhova’s lawsuit.

Lokhova vowed an appeal and now her attorney, Steven Biss, has filed his opening brief with the Fourth Circuit Court of Appeals. In his brief, Biss hammers the damning facts that show the harm done to Lokhova, while also hitting an array of legal points underlying the lower court’s decision.

Filed under suits I wish to succeed.


Just a few months after Hunter Biden joined the board of Burisma Holdings, the Ukrainian gas company landed a deal with an Obama administration renewable energy program that had been championed by one of his father's key vice presidential advisers, newly released State Department memos show.

The Memorandum of Understanding between Burisma and USAID's Municipal Energy Reform Project in Ukraine (MERP) was signed in October 2014, according to a copy of the agreement obtained by Just the News under the Freedom of Information Act.

At that time, Burisma was under very public investigations by both the British government and the Ukrainian prosecutor general's office and considered by the State Department to suffer from corruption issues.

And the Burisma official who signed the MOU, Andrii Kicha, was publicly identified in British court documents in 2014 as someone whose conduct was questioned during the probe. More recently, Kicha was detained in Ukraine in what law enforcement authorities there said was a failed attempt to deliver a $6 million bribe to prosecutors designed to end continuing investigations of the controversial gas company.

Also via the Wombat's In The Mailbox: 06.25.20 Volokh Conspiracy: In Re Michael Flynn As Bush v. Gore. A legal comparison.
Posted by Fritz at 10:18 AM