Let's see what we have today, he says as he cracks open the digital vault and starts rummaging through it. 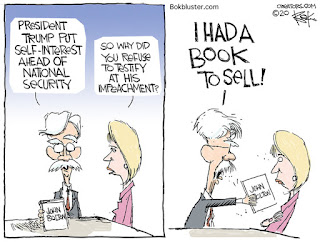 Ah, yes, John Bolton. Matt Margolis at PJ Media, Is This Proof That John Bolton's Book Is Full of Lies? "John Bolton Praised Trump's China Approach Before Book Deal" and then changed his mind when it was convenient. John Swan at Axios, Bolton on a Trump second term: Be afraid, he might do more things John Bolton wouldn't approve of in retrospect. NewsMax (yeah, I know) Bolton Would Consider Testifying Against AG Barr. Testify what? The article doesn't say. Why would he be anywhere near the DOJ?  NYPo, Pompeo says Bolton was shut out of meetings because ‘he was leaking’  Clearly, though, he loves the role of spoiler. BPR, KT McFarland: Here’s what ‘condescending’ John Bolton told me about Trump on Election Day


In an opinion piece published by Fox News Monday, K.T. McFarland revealed that she had “doubts” about Bolton’s ability to successfully be Trump’s national security adviser after an encounter two years before he even took the job. McFarland recounted a 2016 incident in which Bolton acknowledges he had voted for Trump but added, “He’s an idiot, but anybody is better than Hillary Clinton.”

I admit to similar thoughts as I cast my ballot, but Trump has vastly exceeded my expectations.

And speaking of rummaging through the digital vault, and finding new stuff, John Solomon at JTN reports that the DOJ reveals discovery of new Strzok notes in Flynn case "Prosecutors reveal they recently found new notes from the lead investigator in the Russia case that are exculpatory to Flynn." Funny how they keep finding that stuff.


Acting U.S. Attorney Michael Sherwin informed U.S. District Judge Emmet Sullivan of the discovery in a midday court filing, revealing the single page of notes were believed to have been taken by Strzok during the critical juncture of early January 2017 when FBI agents recommended shutting down their investigation of Flynn only to be overruled by FBI superiors.

"This page of notes was taken by former Deputy Assistant Director Peter Strzok. While the page itself is undated; we believe that the notes were taken in early January 2017, possibly between January 3 and January 5," Sherwin wrote in the motion. The prosecutor said it was possible more documents may be produced to the court.

The page of notes were not made public with the filing because they are currently subject to a protective order.


The Daily Caller News Foundation was unable to view the document because it was filed under seal. A source familiar with the document told the DCNF that the notes are “very significant” to Flynn’s case.

The source, who spoke on the condition of anonymity because the document was filed under seal, said the notes are “totally exculpatory” for Flynn.

The charges should have been dismissed the minute it was clear the FBI was deliberately withholding exculpatory material. More on the Flynn fiasco from John Solomon at JTN, Did obscure Pentagon office leak the secret Flynn call? Grassley wants to know, "Senate Finance chairman sets July 2 as deadline for answers about informer Halper, contacts with reporter Ignatius."

Team Candace Owens reports that Trump Hints at Return of Richard Grenell in “High Level” Position in the Administration. Good.

Remember how the left cited errors in a bunch of FISA applications audited by Horowitz as proof that the errors were merely accidental and not political? FBI Finds One ‘Material’ Error In Audit Of 14 FISA Applications, Far Fewer Than In Carter Page Spy Warrants. Chuck Ross, Da Caller:


The FBI disclosed in a little-noticed court filing last week that the bureau found only one “material” error in a review of 14 applications to conduct surveillance against American citizens, an error count that is far lower than the 17 “significant” issues flagged in surveillance orders granted against Carter Page, the former Trump campaign aide.

FBI’s general counsel, Dana Boente, and Melissa MacTough, a Justice Department national security official, said in a filing June 15 to the Foreign Intelligence Surveillance Act (FISA) Court that the single material error found in the 14 applications was not a serious enough infraction to invalidate the underlying surveillance warrant.

That stands in stark contrast to the Justice Department’s decision to invalidate two of the four FISA warrants against Page due to the rampant errors in those applications.

I'll get excited about it the day DOJ gets around to arresting Hillary for her secrecy violations. Meanwhile, ET reports Roger Stone Says He’ll Seek to Delay Start of Sentence In ‘COVID-19 Infested Prison’, further delaying the inevitable pardon (inevitable only if the conviction doesn't get overturned by a higher court, when it turns out the FBI withheld exculpatory evidence they way they did for Michael Flynn).

A little side light to the Berman story, and a touch of Biden too, from John Solomon at JTN.  Fired NY prosecutor was given Biden-Ukraine allegations in 2018 but didn’t follow up, emails show. "Ukraine prosecutors didn't want the political spectacle that became impeachment and simply sought to turn over evidence about Joe Biden and election interference to U.S. prosecutors, memos show."


The memos show that well before Ukrainian prosecutors reached out to Rudy Giuliani, President Trump’s lawyer, in 2019 to talk about the Bidens and alleged 2016 election interference they first approached Berman’s office in New York in October 2018 via another American lawyer.

The memos show Little Rock, Ark., lawyer Bud Cummins, a former U.S. attorney himself, reached out at least five times in October 2018 to Berman seeking to arrange a meeting with then-Ukrainian Prosecutor General Yuriy Lutsenko. Lutsenko, who emerged as a key figure in the impeachment scandal, wanted to confidentially share with federal prosecutors in New York evidence he claimed to possess that raised concerns about the Bidens’ behavior as well as alleged wrongdoing in the Paul Manafort corruption case.

“Prosecutor General Yuriy Lutsenko is offering to come to U.S. meet with high-level law enforcement to share the fruits of investigations within Ukraine which have produced evidence of two basic alleged crimes,” Cummins wrote Berman on Oct. 4, 2018, one day after the two had talked on the phone about the allegations. The allegations included that Joe Biden had “exercised influence to protect Burisma Holdings” after his son Hunter and his son’s business partner Devon Archer had joined the Ukrainian gas company’s board of directors and “substantial sums of money were paid to them,” Cummins wrote.

Da Wire, Jim Jordan Rebukes Judiciary Committee Chairman For Subpoenaing AG Barr Even Though He Agreed To Testify. I'm pretty sure he has no shame.

Even after the release of the Russia witness transcripts, Schiff insisted that “there is ample evidence of the corrupt interactions between the Trump campaign and Russia, both direct and circumstantial.”

“It’s been stunning that all we have gotten from the mainstream media is sort of bovine silence in the face of the complete collapse of the so-called Russiagate scandal, which they did all they could to sensationalize and drive,” Barr said in part of the interview that aired Sunday. “And it’s, like, not even a ‘whoops.’

They’re just onto the next false scandal. So, that has been surprising to me that people aren’t concerned about civil liberties and the integrity of our governmental process.”

It should be stunning, but it's not really. We expect the media to mislead.
Posted by Fritz at 8:59 AM