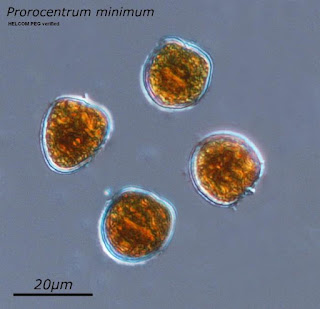 
City officials reported a fish kill and brown tide in area waterways. Heavy rainfall will help with dilution, since area creeks don't flush well with the tides. According to the city, nutrient loads need to be reduced in order to avoid toxic algae blooms. Residents are encouraged to pick up pet waste, reduce the use of fertilizer and reduce impervious surfaces.

The red tide, brown tide or mahogany tide is caused by a microscopic algae that is common this time of year. Rising temperatures contribute to the growth of this algae, the city noted. Fish usually swim to safer waters, but fish kills do happen. It is safer not to fish or swim in waters affected by the brown tide, although it normally is not toxic to humans, the city noted.

According to the Maryland Department of Natural Resources, Prorocentrum blooms occur each spring in the mid-salinity waters of the Chesapeake Bay at varying intensities. The DNR shared that the cells are typically delivered to the upper Chesapeake Bay in spring by traveling in the up-bay moving, higher salinity bottom waters from the lower Bay. As waters mix and upwell in the mid and upper Bay, cells are delivered to nutrient and light rich surface waters and commonly result in areas of Mahogany tides. Although the blooms are usually most intense during the spring, they have occurred in almost every month of the year. Prorocentrum has also been identified in Maryland's Coastal Bays, the DNR noted.

In addition to warm weather, which definately promotes their growth, Prorocentrum and similar red tide dinpflagellates also like relatively still water. Having flagella they are capable of movement, but only very slowly. This gives them the ability to migrate up and down to find the best combination of light, temperature and nutrient conditions. Too much wind mixing makes that difficult.

The harbor has a pretty good mahogany tide going now, even though the nearby beach water is relatively clear.
Posted by Fritz at 3:01 PM