Whenever you hear of a well publicized hate crime, it's wise to wait a couple of days or so for some research before concluding that some deplorable committed it. Stacy McCain, Fake Noose, Fake News


Not a hate crime:


The FBI has determined that a noose found in NASCAR driver Bubba Wallace’s garage at Talladega Superspeedway on Sunday had been there since at least last year, according to the bureau.
A statement issued by U.S. Attorney Jay E. Town said that an investigation has concluded that no federal crime was committed.
“The FBI learned that garage number 4, where the noose was found, was assigned to Bubba Wallace last week. The investigation also revealed evidence, including authentic video confirmed by NASCAR, that the noose found in garage number 4 was in that garage as early as October 2019,” the bureau said. “Although the noose is now known to have been in garage number 4 in 2019, nobody could have known Mr. Wallace would be assigned to garage number 4 last week.”
Further details were not immediately released. The FBI said no charges would be pursued in relation to the incident.

The supposed “noose” was just the rope pull-down handle for the garage door, where somebody had tied a loop in it for a handle. No one who had spent any time around that track could have thought this was a racial threat, but for some reason, NASCAR officials did, and triggered days of hysterical self-denunciation by NASCAR officials and drivers.
Bubba Wallace went on The View and said only “simpleminded” people would doubt this was a hate crime:


“People are entitled to their own opinion to make them feel good or help them sleep at night,” he said, adding, “Simpleminded people like that, the ones who are afraid of change, they use everything in their power to defend what they stand for.”

Got that? You’re just stupid and “afraid of change.”

But as Ace reports, somebody talked a little sense into him later: Second-Rater Charity Case and Racial Paranoiac Bubba Wallace Tries Some Damage Control After Doubling Down On His Race-Baiting Hallucinations

Even before the FBI ruled, sundance at CTH was on it, posting pictures showing the "noose" knot on the pull rope long before Bubba came to Talladega, Fake Noose – The NASCAR Bubba Wallace “Rope Noose” Was a Purposeful Hoax…

But to be a little fair, the knot does look a bit like a noose knot, with several wraps of line above the loop (traditionally 13 wraps, which is a terrible waste of rope). The noose knot or hangman's knot:

But a noose knot would make an awful door pull; the knot would want to tighten onto your hand. More likely it was a Kreh Knot or some similar non-slip loop knot. 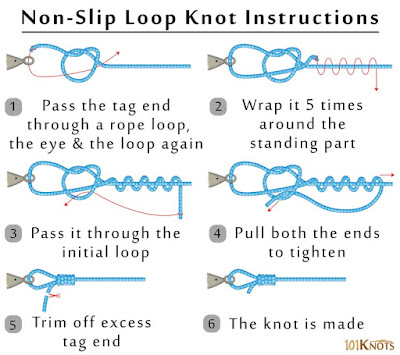 This is basically the knot I use to attach most lures to a leader, though I rarely use more than 2 wraps. The loop allows free motion of the lure, and it won't slide tight. The pictured knot in the garage seems too slim to be a hangman's noose, and I can't see where the working end ended up. On a hangman's knot, the working end winds up away from the loop, while in a Kreh Knot, the working end points into the loop.
Posted by Fritz at 7:52 PM