We'll open with Margot Cleveland at Da Fed, who reports how the Michael Flynn Circus Devolves Into Court-Weaponized Partisanship. "By opening his courtroom to John Gleeson and other anti-Flynn amici, Judge Sullivan has converted the judicial branch into an emissary of the Democratic Party."


In questioning Wall on the government’s position, Judge Wilkins asked whether a district court judge must grant the government’s motion to dismiss an excessive force case against a white police officer where “the prosecutor was dismissing the case because it did not believe that a white police officer should have to answer for using excessive force on a black defendant.”

Dismissal would be required in that case, Wall explained, because the court cannot force “the executive to keep the case alive.” But in that circumstance, “for that kind of equal protection violation,” Wall continued, the remedy would be in other cases where a black defendant faced prosecution that a white accused avoided.

Judge Wilkins raised the hypothetical again later, positing that where such racist motives were in play a federal judge should refuse to dismiss the case to put political pressure on the prosecutor: “So why isn’t it the case if the government makes a considered but racist decision, that it just doesn’t want to have a white officer stand trial for excessive force on a black victim, that the district court can deny the motion and then the political chips can fall where they may, and perhaps under pressure on the public or Congress or whatever, the district court may not be able itself to force the government to prosecute the case, [but] maybe from the pressures from the media, a new prosecutor is appointed and the case proceeds?”

Wall reiterated the government’s position that a court cannot force the executive to keep the case alive, but also stressed that “we don’t have anything like that here.” That fact, coupled with the tinder-box atmosphere that has enveloped the country for the last two weeks, is what made Judge Wilkins’ question so shocking.

Ace read  RedState's "Shipwreckedcrew:" Based on the Oral Arguments, Flynn Will Win In His Motion, and disagrees.


I don't think he's right-- I think the DC Circuit Court it is going to protect its lunatic incompetent from public embarassment -- but he thinks that Powell/Flynn will win.

I think he's being very, very optimistic about that.

He adds that one judge -- an Obama appointee, of course -- decided to inject 300 cc's of racial poison into the hearing. For no reason, other than to say, "How dare we rebuke a black judge when George Floyd is dead."

In turn "shipwreckedcrew" poses a new hypothetical, DOJ To Subpoena Emails Between Judge Sullivan and Judge Gleeson? Why Not?


DOJ needs to examine whether Judge Sullivan’s exercise of judicial discretion has been merely for the purpose of executing his role as an Art. III judge, or whether his actions are pretextual, designed to hide ulterior motives that are “clearly contrary to the interests of the public”. DOJ needs to inquire as to whether the unprecedented steps taken by Judge Sullivan — appointing amicus counsel to offer an argument in opposition to DOJ’s motion, selecting of Ret. Judge Gleeson to be that counsel in the immediate aftermath of Judge Gleeson’s OpEd in the Washington Post, Judge Sullivan’s inviting third-party amici to file briefs opposing the DOJ motion, and setting a schedule for considering the motion which provides no definitive “end date” to his inquiry — are all part of a pre-designed effort to extend the pendency of Gen. Flynn’s case past the election, and maybe into the term of a new Presidential Administration.

Maybe Judge Sullivan, Judge Wilkins, and Ret. Judge Gleeson would appreciate the “separation of powers” concerns raised by DOJ in its briefs filed on behalf of Gen. Michael Flynn if they considered for a moment a scenario where the “shoe was on the other foot.”

Both Judges claim that a “rule” of court procedure entitles a judge to conduct an expansive inquiry — with no definable standards or boundaries — into the thinking of DOJ officials in connection with the decision to seek the dismissal of the case filed by the Special Counsel’s Office (SCO) against Gen. Flynn. 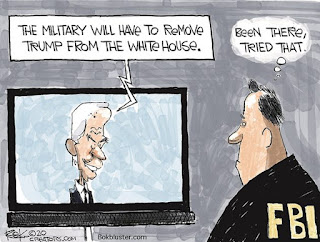 
“Keep in mind. Peter Strzok, that I think is now a household name, has his fingerprints on every aspect of this” said Gowdy.

Uncover DC, Orbis: Perkins Coie Engaged FusionGPS to Provide Information to Challenge 2016 Election Validity. But Trump is the one who will refuse to honor an election?


Within a filing in the FusionGPS case, is an attachment from a related appeal that Fridman, Aven, and Khan filed in litigation they also brought against Orbis (Steele’s company). The filing includes written answers provided by Orbis in matters before the court in the UK. On page 76, is a courtesy copy of a British High Court Filing involving Christopher Steele and Orbis.

Orbis is asked why Perkins Coie needed the information in the memo about Alfa Bank. The response is quite alarming. Orbis answers (emphasis ours) “Fusion’s immediate client was law firm Perkins Coie, LLP. It engaged Fusion to obtain information necessary for Perkins Coie, LLP to provide legal advice on the potential impact of Russian involvement on the legal validity of the outcome of the 2016 US Presidential Election. Based on that advice, parties such as the Democratic National Committee and HFACC Inc. (also known as “Hillary for America”) could consider steps they would be legally entitled to take to challenge the validity of the outcome of the election”
. . .
There are serious implications to the testimony. What Orbis is certifying to the UK court, is that when Perkins Coie hired FusionGPS in June of 2016, they did so with the expectation that FusionGPS would provide them information they would need to challenge the validity of the 2016 election, based on Russian interference. The only problem, is that FusionGPS was retained by Perkins Coie much earlier than what is purportedly the start date of the now infamous Crossfire Hurricane counterintelligence investigation. The FBI asserts that the Crossfire Hurricane investigation began in late July of 2016, based on a tip about George Papadopoulos meeting with Australian diplomat Alexander Downer. The entire premise of that investigation in now under its own scrutiny in the John Durham probe.


But Johnson, chairman of the Senate’s chief oversight body, is playing a major role in advancing a key theme of the president’s reelection bid — that he and his associates were targeted unfairly by the outgoing Obama administration.

He is also investigating corruption allegations involving Hunter Biden, son of the presumtive Democratic presidential nominee, stemming from the younger Biden’s role on the board of the Ukrainian gas company Burisma. Trump and congressional Republicans have claimed the former vice president sought to shield his son from a Ukrainian-led investigation into Burisma — though Biden denies the allegation.

In both instances, Democrats have accused Johnson of abusing his power, misusing the Senate’s oversight resources to boost Trump’s political prospects and even operating a Russian disinformation front that jeopardizes U.S. election security — all serious allegations, even in today’s hyperpartisan Senate. But Johnson insists it’s just the opposite. “I’m a very nonpartisan guy. I just am,” Johnson said in an interview. “I like using the word nonpartisan.”

"I don’t know of any book that's been published so quickly while the officeholders are still in government, and it’s about very current events, current leaders and current discussions of current policy issues, many of which are inherently classified," Barr said.

Via Capt. Ed,  Breaking: Whelan Gets 16 Years For Espionage In Russia. I figured they wanted to trade him for Maria Butina, but apparently they have someone more important in mind.
Posted by Fritz at 10:00 AM