Most of today's links are rehashing of Rod Rosenstein's 3 hour testimony to the Senate. Really only an hour and half or so, it you fast forward past the Senate Democrats speaches about how they should be holding hearings on Wuflu, George Floyd, or damn near anything else instead.

David Krayden at Da Caller hits the highlights in Rosenstein Says He ‘Would Not’ Have Signed FISA Warrant If He Knew Then What He Knows Now. Jerry Dunleavy at WaEx, Rosenstein says McCabe was 'not fully candid' about Comey's memos. Says he was left out of the loop. Convenient, that. CNS News, Rosenstein 'Fairly Confident' That 'Political Bias' Did Not Enter Into Mueller Investigation. By "fairly confident" do you mean 51% certain? More or less. Given the Rods sympathies tend on the liberal side, I suspect some bias in his opinions on this.


Sen. Mike Lee (R-Utah) asked Rosenstein: "Before you became the acting attorney general in this context, didn't you, at some point, get a sense for the politicization with the FBI, at the top level of the FBI, even beyond Jim Comey?"

"No," Rosenstein said. "You didn't have any sense that there was a targeting of a presidential candidate, and later, someone who became the president of the United States?" Lee asked.

"I did not have that impression," Rosenstein said.

"What was the legal basis for appointing Mueller? And didn't you become concerned at some point about the composition of Mueller's staff? Let's take, for example, Mr. Weissmann. Mr. Weissmann is now fundraising for Joe Biden, as is his right. Previously, he was an advocate of the Hillary Clinton campaign. Did that bother you, that you had known Democratic operatives, overwhelmingly Democratic-leaning people who were part of this team?"

"It would have been preferable, Senator, to have a more politically diverse group, but if they followed the rules, their political ideology wouldn't matter," Rosenstein said.

"But, Senator," Rosenstein said, I had Bob Mueller in charge of this. And based upon that and based upon my conversation with him, I'm fairly confident that the political bias did not enter into that investigation."

Maybe Mueller played fair, but it would seem that he was rather a figurehead, with his chief of staff Aaron Zebley and chief prosecutor Andrew Weissman doing most of the steering. David Marcus at NYPo thinks Rod Rosenstein’s admission exposed heinous plot against Trump


The key moment came in questioning from Senate Judiciary Committee Chairman Lindsey Graham (R-SC), who asked, “If you knew then what you know now, would you have signed the warrant application?,” referring to a Foreign Intelligence Surveillance Act warrant renewal concerning Trump campaign aide Carter Page.

“No,” testified Rosenstein, “I would not.”

And just like that, it became clear that the national torture of three years of the Russian collusion investigation simply should not have occurred. The problems were myriad. In Rosenstein’s words, the FBI “was not following the written protocols, and that significant errors appeared in applications.” What has emerged from the recent inspector general’s report and this testimony is that the Obama administration’s efforts to investigate and prosecute Trump administration officials wasn’t based on facts, but negligence or malice.

Rod was running a big ship, and can't be expected to know what every deck hand was doing, but he damn well should have known what his immediate underlings were up to. Madeliene Osburn at Da Fed, Cruz Unloads On Rosenstein: Your Handling Of Mueller Probe Proves You Were Either Corrupt Or Incompetent. While I lean to incompetent, both is a possible answer. CNS News, Sen. Ted Cruz: What Obama Admin. Did Makes Everything Nixon Did Pale in Comparison. Indeed. As I've noted before, The Watergate burglury was carried out by private persons, while the Russiagate crimes were carried out by various agencies of the government.

Fox, McCabe accuses Rosenstein of giving ‘false’ testimony on Comey memos. Earl of Taint: Which One Is The Lying Rat? 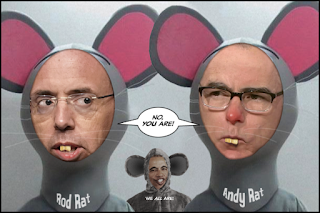 For our moment of Senatorial levity, there's nothing like Mazie Hirono, (D-Lalaland), Liberal Lawyer: Dem Senator Pretty Much Made the Trump White House's Case in Rosenstein Hearing


I can’t tell if he’s mad here at Lindsey Graham, at the dispiriting prospect of watching Ted Cruz mug for Fox News’s cameras yet again, or if he’s just had his fill generally of partisanship disguised as thoughtful oversight. Whatever the answer, he’s so peeved that I’m thinking that bowl of Kellogg’s must have been no less than 85 percent urine.

And the day would not be complete without a little on Michael Flynn. From "Adam Mill" at AmGreat  notes how the Bombshell Sullivan Brief Fails to Grasp Key Facts in Flynn Case. Fails to grasp, or deliberately glosses over?


Judge Emmet Sullivan on Monday responded to Michael Flynn’s request for an order from the court of appeals to force him to dismiss the case against President Trump’s former national security advisor. In the 46-page brief filed on Sullivan’s behalf, one fact stands out above the others, a stunning bombshell: the judge has not shown that he’s clear as to what Flynn said to the FBI or why it was said to be a lie.

From ET, Flynn Case: In a Sign of Urgency, Appeals Court Sets Hearing in 10 Days, which is rocketing along by judicial standards. And from Chuck Ross at Da Caller, Citing Recent DOJ Decision, Former Flynn Associates Seek Reprieve In Turkish Lobbying Case


Two former associates of Michael Flynn have seized on the Justice Department’s motion to drop charges against the retired general to call for relief from charges that they illegally lobbied for the Turkish government.

Bijan Rafiekian, a former Flynn business partner, and Ekim Alptekin, a former Flynn client, claim to be collateral damage in the government’s investigation of Flynn, who pleaded guilty to lying to the FBI in December 2017.

FARA is a joke. Barely more often enforced than the Logan Act, and used largely for political purposes, it is clearly a violation of the first amendment. Speach is speach, commercial or not.

And today's teaser from Twitchy, President Trump tells Roger Stone ‘he can sleep well at night!’

No. Roger was a victim of a corrupt and illegal Witch Hunt, one which will go down as the greatest political crime in history. He can sleep well at night! https://t.co/HHg24tcZrx
— Donald J. Trump (@realDonaldTrump) June 4, 2020