EPA Wants You to Die and Rot Without Fuss

My evidence? This article from the Bay Journal, a news organization that's a nearly wholly owned subsidiary of the EPA Chesapeake Bay Program: Let your grave enter the circle of life, not a dead zone.


Where should our remains go in a world increasingly crowded by human effects? Atmosphere, water, land: All are getting filled with the debris of our lives—waste, gases, chemicals going everywhere they don’t belong. And the human body?

Our earthly remains have become nothing less than underground time bombs for groundwater. Cadavers get pickled in gallons of formaldehyde fluid; we basically turn them into cancer-causing toxic waste.

Ultimately, even formaldehyde is decomposed by bacteria. There are very few organic compounds which are completely immune to bacterial degradation.


Most are then tucked into wood-fiber caskets, likewise saturated in formaldehyde, methyl and xylene. That’s why casket manufacturers are among the top-listed hazardous waste producers tracked by the U.S. Environmental Protection Agency.

I suspect they mean methyl alcohol, not "methyl". But then the people who write rarely have a science background.


The entire toxic missile then gets encased in a metal or concrete vault — the whole contraption making up a two-ton land mine to lodge in the ground. Eventual leakage is all but certain, turning the departed into poison for the very community the person might have worked hard during life to benefit.

An amusing song about an over-the-top funeral from the era of my youth, the Chad Mitchell Trio, where John Denver toiled in his youth.

Hey, they even have a song for this one!


Why is all of this toxic land use condoned, on a planet increasingly pinched for living habitat? That’s another mystery. The EPA, charged with regulating hazardous waste from cradle to grave, strangely overlooks all of the formaldehyde in graveyards themselves.

But what about cremation? Surely


Cremation may seem a healthier option, yet it is an energy waste and carbon emitter. Each “roasting” takes 75 minutes of ultra-high temperatures, rapidly burning vast amounts of fuel, while shooting greenhouse gases, mercury and other contaminants into the air, land and water. And it still leaves the “cremains”—including mercury and other metal toxins — which families often sprinkle in favorite nature spots, including water bodies.

The only way that you can avoid CO2 production from a dead body is to preserve it, and we've already seen they don't approve of that. And hey, you know, you don't have to leave the mercury laden fillings in the body before you roast 'em up, and they won't be needing them gold teeth neither.


But the question remains: What should be done with our bodies once organs have been donated and the bulk remains?

So they're assuming that all those bodies make suitable organ donations? I intend to use mine until their past their expiration date.


Blessedly, our biosphere has been solving this puzzle — and quite cheerfully — throughout the eons. Check out any landscape where the dead are allowed to decompose: leaf litter, rotting logs, old feathers, bones, acorn shells, dry weeds in a field.

All of this decay turns seamlessly back into life — microbes, mosses, topsoil, wildflowers, grubs for birds, mushrooms for bears, amphibians, insects — the entire web of life.


Nature’s path is not cradle to grave. It’s what green designer William McDonough calls “cradle to cradle”—life into life. It’s how our biosphere itself evolved and got us here, and it’s meant to continue long after we’re gone.

That’s why it’s heartening that the green burial movement is resuscitating more gracious and grateful ways of returning ourselves to a world that gave us its life.

They do, however, provide a picture of an old graveyard on one of my favorite fishing spots, Holland Island: 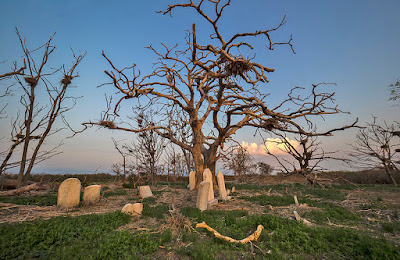 We're in the midst of this with my mother, who requested cremation, and burial in a nice site on the top of hill in Murphy's, surrounded by trees and chaparral. Many modern graves there, and no problem with the trees until the recent drought, which killed quite a number, as it has to trees all around California.

Look, I don't mind if you or yours choose to be stuck in the ground unpreserved, it seems sensible enough to me. But is it really such an important issue that we need EPA and it's house organs propagandizing us about it? Is there any part of life, and now death, free from their virtue shaming?
Posted by Fritz at 4:02 PM