A very interesting, and disturbing video was released, with a cellphone camera in the occupier vehicle syched with law enforcement drone footage  in the shooting of Levoy Finicun and Ammon Bundy that marked the end of the Oregon occupation:

and some new "facts":


Despite claims from occupiers and their supporters that law enforcement fired more than 100 times into the truck carrying Finicum and other militants, investigators say only eight shots were fired. Video evidence provided Tuesday outlined in detail the actions taken during the traffic stop and shooting. Finicum was hit with three bullets in the back, all fired by Oregon State Police troopers.

In the cellphone video, the occupants of the car are convinced they are under fire at 5:23 or so, long before Finicum exits the vehicle and is shot down. I think I hear a shot, but it appears the LEOs are using some sort of flash bang at times and maybe "beanbags" break windows, so it's difficult to tell. However, a picture of the vehicle seems to show a bullet hole in the roof: 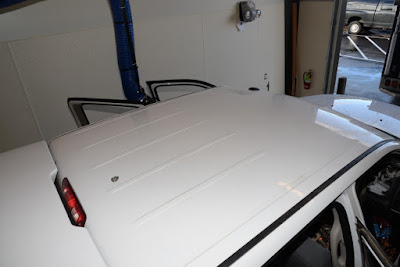 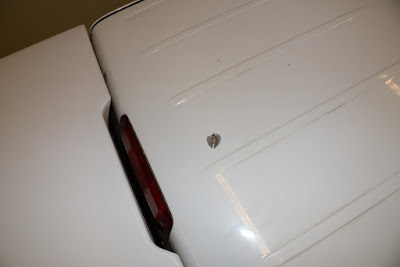 Which suggests they were shot at by someone at some elevation above the vehicle (not the officers seen in the video).


Investigators say that along with six shots fired by state police, FBI agents fired twice at Finicum’s vehicle — and that those shots were initially not disclosed to the joint task force examining Finicum’s death. U.S. Attorney Billy Williams said an investigation into those shots and possible misconduct is ongoing by the Department of Justice’s inspector general.

In a press release Tuesday afternoon, U.S. Rep. Greg Walden, R-Oregon, said he was “disturbed and bewildered” by the revelation of the two unaccounted for shots.


An FBI agent is suspected of lying about firing twice at Robert "LaVoy" Finicum and may have gotten help from four other FBI agents in covering up afterward, authorities revealed Tuesday.

The bullets didn't hit Finicum and didn't contribute to his death, but now all five unnamed agents, part of an elite national unit, are under criminal investigation by the U.S. Justice Department. Inspector General Michael Horowitz is leading the independent inquiry.
. . .
"The question of who fired these shots has not been resolved," said Greg Bretzing, special agent in charge of the FBI in Portland. The federal agency is cooperating with the inspector general's investigation, he said at a news conference. . . . Cox's video showed that one shot hit the truck's left rear passenger window as Finicum stepped out. At the time, Finicum appeared to have his hands at least at shoulder height.

Hands up, don't shoot? Maybe it doesn't apply to ranchers.


Investigators later established that the bullet entered the truck through the roof before shattering the window and concluded it was fired by an FBI agent. Another bullet from the same FBI agent apparently went wild and missed the truck altogether, the investigation showed.

Notice that at no time after Finicum is shot do they make any attempt to check on him or treat him. And they spend a lot of time hiding behind their vehicle shooting out the windows of the occupier vehicle, and shining lasers on the occupants (now mostly women). Very, very brave.
Posted by Fritz at 5:36 PM