Bruce (or whatever the hell he/she wishes to be renamed) Jenner shocked Diane Sawyer and other liberals by coming out as a Republican: Bruce Jenner Blasted Online After Coming Out As a Republican: ‘Personally, I Am Disgusted’ 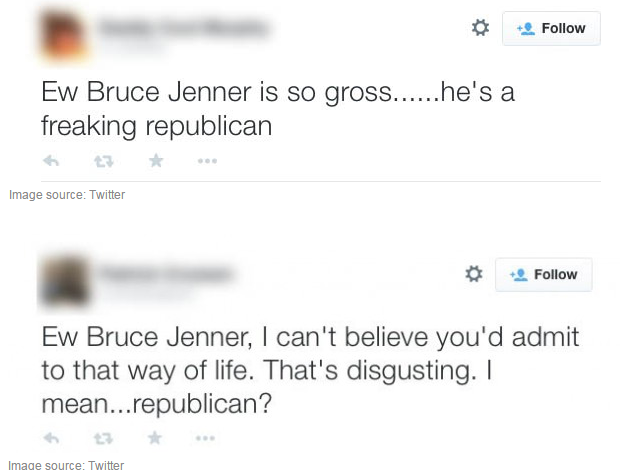 One is tempted to hope that at least some of these posts are deliberate irony; but I have my doubts.

As confused as Jenner may be regarding his gender, as a person who earned his own money through his athletic prowess, he understands well that the Republican party is the party with his economic self interest dwell.


The producers of the New York City show became the first people to boycott a venue owned by Mati Weiderpass and Ian Reisner, gay entrepreneurs who hosted Cruz for an event this week. As first reported by Maggie Haberman in the New York Times, Cruz held a "fireside chat" with about a dozen interested people at the penthouse owned by Weiderpass and Reisner. The ostensible topic was Israel; Cruz, like many Republicans, is looking for openings with donors who have leaned Democrat may be shopping around for a new party out of a feeling that the Obama administration has slighted the Jewish State. Yet Cruz told attendees that gay marriage was an issue for the states -- though if one of his daughters were gay, he would love them just as much.

That kindled a Facebook campaign to boycott Fire Island Pines Establishments and the gay-friendly Out NYC Hotel. In a statement to Bloomberg News, the campaign's anonymous organizer said that to suddenly think that the new owners of a portion of the Fire Island Pines commercial space support anti-LGBT politicians is a devastating blow to the community," and said the campaign had already gone viral.

Not to be left in the dust, the student government at Johns Hopkins University rushed to ban Chick-Fil-A from having a franchise on campus: The Johns Hopkins Chick-fil-A Ban and the Coming Gay-Marriage Witch Hunt


A new spirit of intolerance has arisen on the Johns Hopkins University campus, and conservative Christians are the targets. The JHU student government’s vote this week to ban any hypothetical future Chick-fil-A outlet from campus because of the company owner’s support for traditional marriage, coming on the heels of the JHU Spring Fair’s censorship of a pro-life fetal-model display as “disturbing” and “triggering,” sends a clear message that students who disagree with liberal orthodoxy are not welcome on the Hopkins campus.

The student government’s vote went beyond merely expressing support for same-sex marriage. The Chick-fil-A ban seeks to introduce unprecedented discrimination against companies owned by religious conservatives into the university’s contracting policies, even though only a few years ago, prominent liberals like Democratic front-runner Hillary Clinton and President Barack Obama had held the same views on marriage. In banning Chick-fil-A from campus for “homophobia,” the JHU student government is only a short step from similarly giving the boot to socially conservative Christian, Catholic, Muslim, Orthodox, and Jewish student groups from campus, as we have seen happen at Vanderbilt University, the 23 campuses of California State University, and others throughout the country.

I wasn't even aware that there was a move for Chick-fil-A to have a campus presence, but if so, what would be wrong with individual students (who, in my extensive college experience rarely pay much attention to the student government) actually deciding where they want to eat? I occasionally enjoy a chicken sammy among the burgers.

Conservative or even less than evangelical liberal students at JHU need to form a "Sad Puppies" type campaign to retake student government from the hands of the SJWs.

Scratch a liberal and find a fascist.
Posted by Fritz at 5:10 PM