The Largest "Cold Spot" in the Universe


At the furthest-most reaches of the observable universe lies one of the most enigmatic mysteries of modern cosmology: the cosmic microwave background (CMB) Cold Spot.

Discovered in 2004, this strange feature etched into the primordial echo of the Big Bang has been the focus of many hypotheses — could it be the presence of another universe? Or is it just instrumental error? Now, astronomers may have acquired strong evidence as to the Cold Spot’s origin and, perhaps unsurprisingly, no multiverse hypothesis is required. But it’s not instrumental error either.

When the Cold Spot was first revealed by NASA’s Wilkinson Microwave Anisotropy Probe (WMAP), astronomers quickly realized that the feature, if real, would be the largest structure ever seen in the cosmos. But with just one space telescope providing the measurements, there was always the concern that something mundane — like instrumental error — could be to blame. 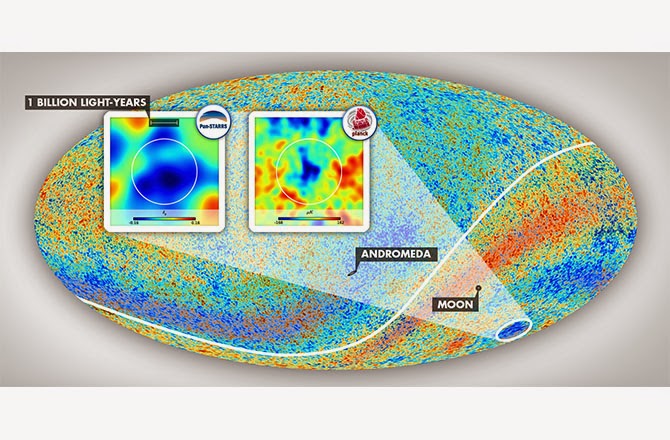 Then the European Planck telescope, that was also launched to measure slight temperature variations in the CMB (known as anisotropies), also saw the Cold Spot. Despite some theories that the feature may actually be an error caused by our statistical analysis methods, it was generally thought that the Cold Spot was real.

One of the most extreme (and, frankly, exciting) hypotheses possibly explaining the Cold Spot focused around the multiverse. Stemming from superstring theory, the multiverse posits that our universe is just one of many universes in a bubbly soup of universes (universi?). And that Cold Spot? Well, it could be one of those neighboring universes nuzzling up against our own.

I'll root for the multiverse explanation.
Posted by Fritz at 5:00 AM